The size of the Great Pacific Ocean Garbage Patch

The Great Pacific garbage patch is a gyre of marine debris particles in the central northern part of the Pacific Ocean bounded by the massive North Pacific Subtropical Gyre, rotating clockwise around an area of 20 million sq km or 7.7 million sq miles. The location in the center of a gyre is calm. The circular movement of the gyre carries debris into this stable center, where it becomes trapped. About 80% of the plastic debris and floating trash come from the Pacific Rim, including nations in Asia and the Americas. The remaining 20% of the garbage comes from ships and other marine sources.

The Great Pacific garbage patch can practically be detected by satellite imagery or even by divers because the patch consists primarily of suspended "fingernail-sized or smaller" plastic fragments (the garbage patch density is about) four particles per cubic meter).

According to the Ocean Cleanup project researchers, the garbage patch covers 1.6 million sq km (620,000 sq mi) and consists of 45,000–129,000 metric tons. It is twice Japan's size and about as big as Alaska's. Some of the plastic in the patch is over 50 years old and includes items such as toothbrushes, water bottles, pens, baby bottles, cell phones, plastic bags, plastic lighters, and nurdles. The seafloor underneath the Great Pacific Garbage Patch may also be an underwater garbage heap.

The Great Pacific garbage is supposed to have increased 10-fold each decade" since 1945. Nowadays, calculated to be double the size of Texas, the area contains over 2.7 million metric tons of plastic.

The map below, created by Reddit user feeeeshie, shows what the great Pacific garbage patch looks like as a layer over the United States. 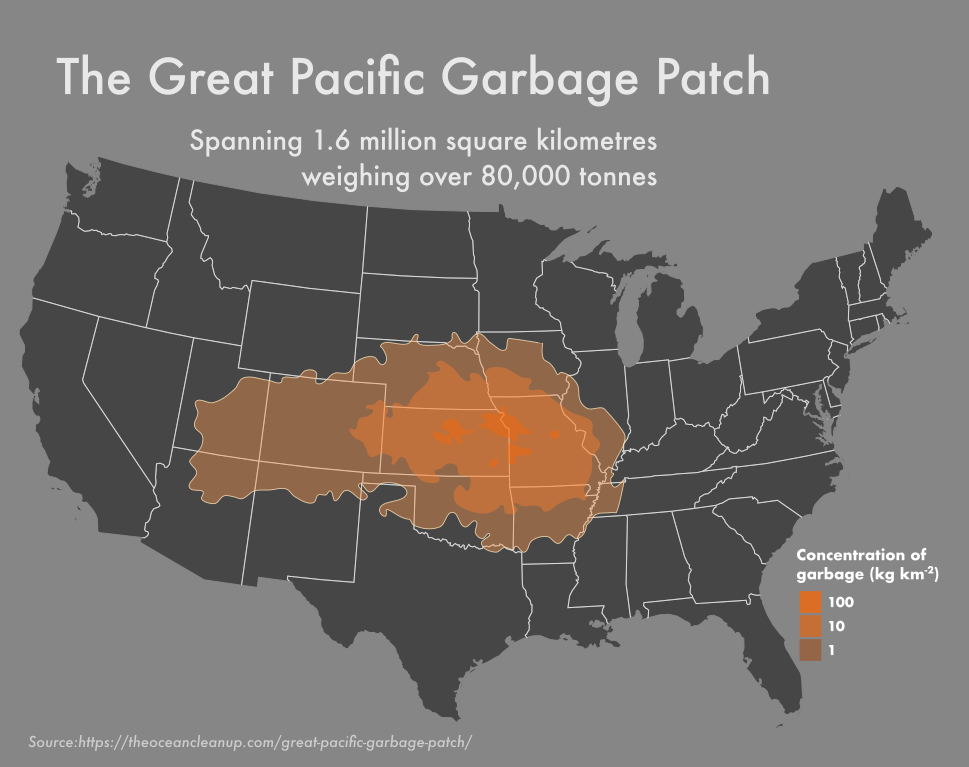