The UN Food and Agriculture Organisation has just published a report on the promotion of entomophagy - the consumption of insects as food. H is a practice that has been around for millennia. Aristotle having waxed lyrical on cicada many centuries ago. Not only do insects contain great nutritional values, but they have also proven to lie more environmentally friendly than raising some livestock.

The map below created by SCMP shows the who, where, what, and how of global insect consumption. 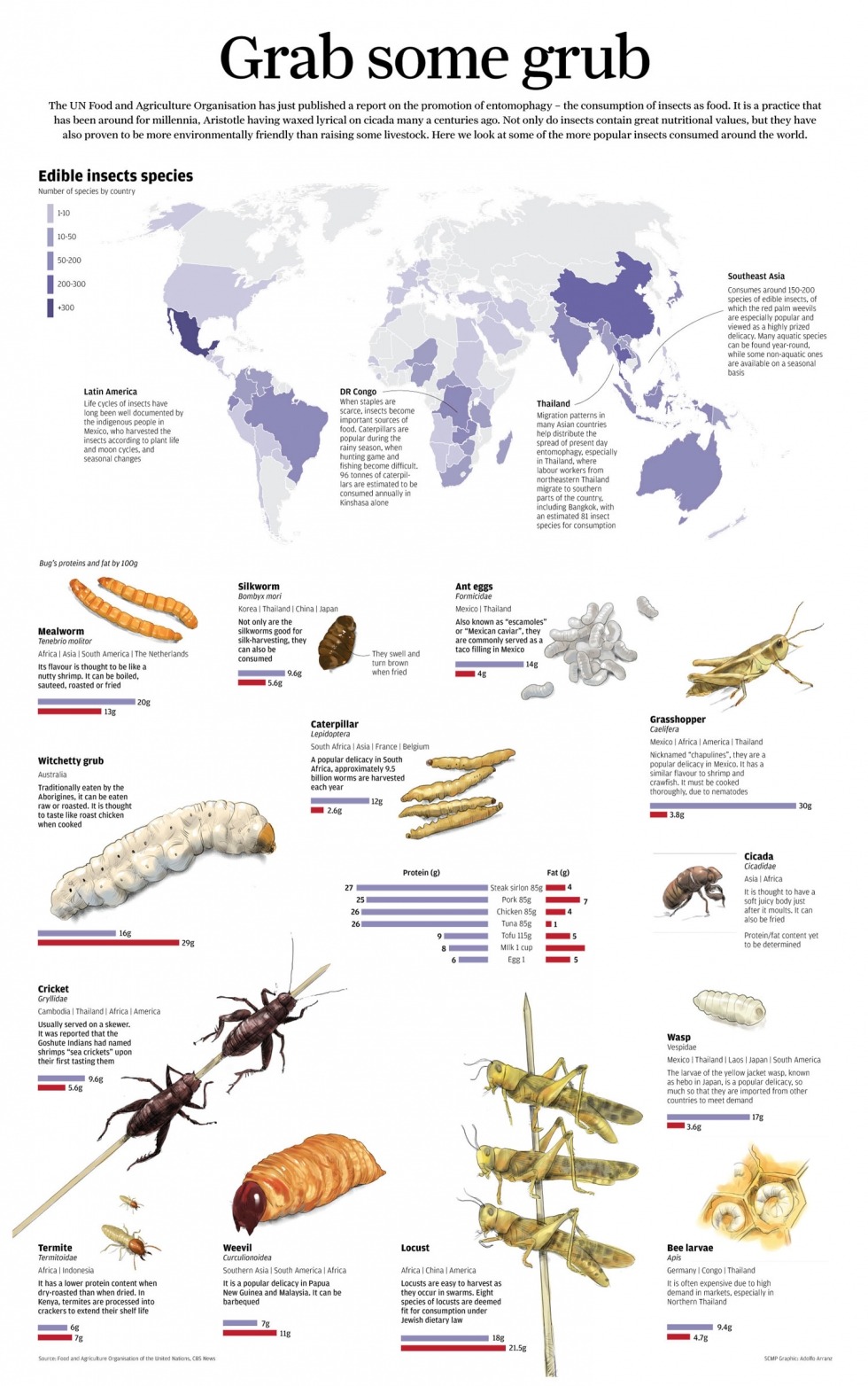 Asia
South Asia consumes around 150-200 species of edible insects, of which the red palm weevils are especially popular and viewed as a highly prized delicacy. Many aquatic species can be found year-round, while some nonaquatic ones are available on a seasonal basis.

Migration patterns in many Asian countries help distribute the spread of present-day entomophagy, especially in Thailand, where labor workers from northeastern Thailand migrate to 10 southern parts of the country, including Bangkok, with an estimated 81 insect species to consumption.

When staples are scarce, insects become essential sources of food. Caterpillars in the Democratic Republic of Congo are popular during the rainy season when hunting game and fishing become difficult; 96 tonnes of caterpillars are estimated to be consumed annually in Kinshasa.

Life cycles of insects have long been well documented by the indigenous people in Mexico, who harvested the insects according to plant life and moon cycles, and seasonal changes.

The most popular edible insects species

Its flavor is thought to be like a nutty shrimp; it can be boiled, sauteed, roasted, or fried.
Continents and countries: Africa, Asia, South America, The Netherlands

Silkworm (Bombyx mori)
Not only are the silkworms suitable for silk-harvesting, but they can also be consumed.
Countries: Korea, Thailand, China, Japan

Grasshopper (Caetfera)
Nicknamed "chapulines," they are a popular delicacy in Mexico; it has a similar flavor to shrimp and crawfish; it must be cooked thoroughly due to nematodes.
Continents and countries: Mexico, Africa, America, Thailand

Wltchetty grub
The aborigines traditionally eat them. It can be eaten raw or roasted. It is thought to taste like roast chicken when cooked.
Country: Australia

Cicada (Cicadidae)
It is thought to have a soft juicy body just after it molts. It can also be fried.
Continents: Asia, Africa

Cricket (Gryllidae)
Usually served on a skewer, it was reported that the Goshute Indians had named shrimps "sea crickets" upon their first lasting them.
Continents and countries: Cambodia, Thailand, Africa, America

Wasp (Vesodae)
The larvae of the yellow jacket wasp, known as hebo in Japan, is a popular delicacy, so much so that they are imported from other countries to meet demand.
Continents and countries: Mexico, Thailand, Laos, Japan, South America.

Termite (Tranitoidae)
It has a lower protein content when dry-roasted than when dried; in Kenya, termites are processed into crackers to extend their shelf life.
Continents and countries: Africa, Indonesia

Weevil (Curtulionoidea)
It is a popular delicacy in Papua New Guinea and Malaysia; it can be barbequed.
Continents and countries: South Asia, South America, Africa

Locust
Locusts are easy to harvest as they occur in swarms. Eight species of locusts are deemed in for consumption under Jewish dietary law.
Continents and countries: Africa, China, America