For centenaries, the Valley of Mexico was filled with a range of rainwater lakes. The Aztecs built their capital Tenochtitlan on an island in the midst of one of those lakes - Lake Texcoco. They built causeways and channels and floating gardens. The Aztec capital was like the Venice of Mesoamerica.

When Spaniards looted Tenochtitlan, they reconstructed a modern city with a grid. However, this new metropolis would regularly flood, eventually leading to efforts to drain the former lakes of the basin. Little by little, the Tenochtitlan city drained the lakes and extended out over the dry lakebed.

Mexico City still has significant flooding problems to this day, but it also faces a seemingly paradoxical situation: it's running out of water. All of the infrastructure proposed at draining the rainwater from the basin serves against attempts to preserve water for human needs. Nowadays, many districts in Mexico City don't have regular running water, and when the rainy period comes, those same districts get far too much water all at once. 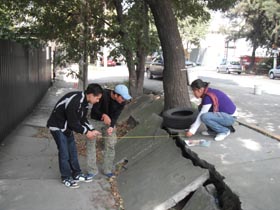 To resolve the deficiency problem, the city started piping water in from far away and pumping it up from the aquifer below, creating yet another problem: the city is sinking.

As the water was sucked up, the ground began to break and crumble like a dried cookie, occurring at various subsidence rates.

Meantime, rainwater, instead of replenishing the ground, can't infiltrate it thanks to impervious asphalt and concrete surfaces above.