Unmapped regions of the ocean floor

There is more data about the surface of Mars than there is about the Earth's seafloor. Just 20 percent of the world ocean floor has so far been planned in detail.

Most of what we know about the ocean topography was received from satellites' gravity data. That's why now, seafloor maps have the resulting resolution is approximately two square miles (5.2 square kilometers). By contrast, topographic maps of Mars and Venus have a spatial resolution that's fifty times more accurate.

Without exaggerating, we can say that we do not know anything about the world ocean and processes that occur there.

Seabed 2030 is an international attempt to crowdsource datasets to comprehensively map the world's oceans at an exact 100m resolution. 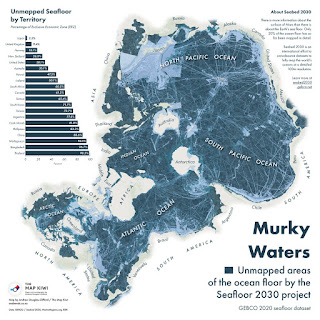