Bears are carnivoran mammals of the family Ursidae. Only eight species of bears are living on our planet. But they are widespread in the Northern Hemisphere and partially in the Southern Hemisphere. 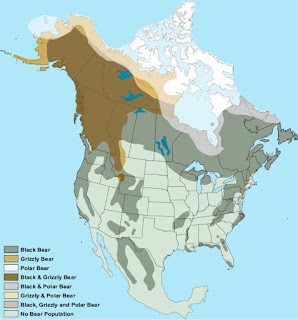 There are three species of bears inhabit North America. The most regular is the American black bear (Ursus americanus). It can be observed in all provinces and territories in Canada except Prince Edward Island and 40 of the 50 states of the USA. There are about 900 000 black bears lives in North America.
The grizzly or brown bear (Ursus arctos), lives in British Columbia, Alberta, the Yukon and Northwest territories as well as in the states of Washington, Idaho, Montana, Wyoming, Montana, Idaho. In North America, approximately 57 000 bears live.
Due to low human activity in its remote Arctic ecosystems, the polar bear (Ursus maritimus) conserves more of its original region than any other persisting large carnivore. About 25 000 polar bears live in the northern areas of Canada, American Alaska, Russia, Greenland and Norway.
Brown bear was previously distributed almost throughout North America.
Presently only approximately 1 500 brown bears are left in the lower 48 states of the United States. Of these, about 800 live in Montana. About 600 more live in Wyoming, in the Yellowstone-Teton area. There are an estimated 70–100 grizzly bears living in northern and eastern Idaho. 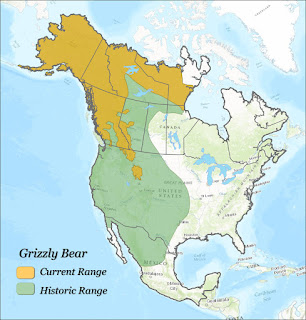