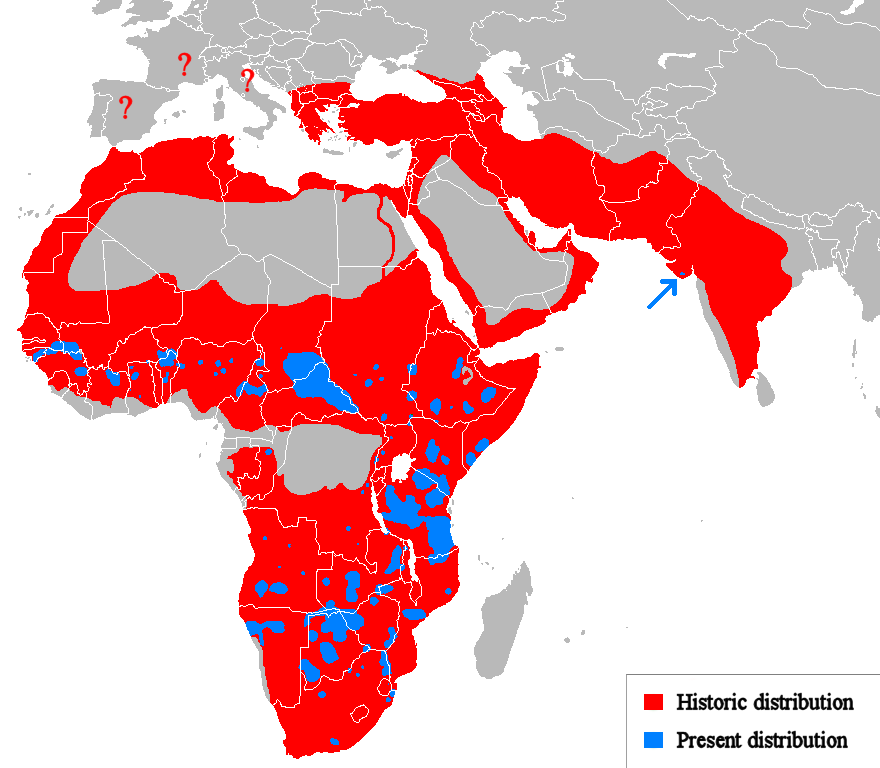 The Eurasian cave lion (Panthera leo spelaea), evolved around 370,000 years ago and ranged widely across Europe and Asia.

It is depicted in Paleolithic cave paintings, such as those found in the Lascaux and Chauvet Caves in France. It was somewhat larger than the modern lion.

Modern lions are thought to have originated around 124,000 years ago in eastern and southern Africa.

They then spread throughout most of Africa and from there into southeastern Europe, the Middle East, the South Caucasus, southern Russia, southern Afghanistan and the Indian sub-continent.

There is some inconclusive historical evidence to suggest that they may also have inhabited other parts of Europe, including modern-day Portugal, Spain, southern France, southern Germany, Italy, and the Balkans.

Although lions have long since disappeared from Europe, according to reports by Ancient Greek writers such as Herodotus and Aristotle, they were common in Greece around 480 BCE.

They became endangered around 300 BCE, and finally became extinct in Greece around 100 BCE. Lions feature heavily in Ancient Greek mythology and writings.

These include the myth of the Nemean lion, a monstrous supernatural beast with armor-piercing claws and golden fur that could not be penetrated by mortals’ weapons. It had the nasty habit of preying on the local population but was eventually dispatched by Hercules in the first of his twelve labors.

In the Middle East, increased use of firearms in the nineteenth century led to the extinction of lions over most of the region. Lions survived in parts of Mesopotamia and Syria until the middle of the 19th century.

By the late 19th century, they had been eradicated in Turkey. They survived much longer in Persia, where the last pride of five was hunted as recently as 1963.

By the late 19th century lions had disappeared from most of India, largely due to hunting. The lion (Panthera leo), once widely distributed across most of Africa and parts of Europe and Asia, is now confined to a number of isolated areas as shown on the map, amounting to only about 20% of its historic range.

Around a third of African lions are thought have disappeared in the past 20 years. Much of this shrinking distribution has been due to hunting and loss of habitat.
Labels: Animals