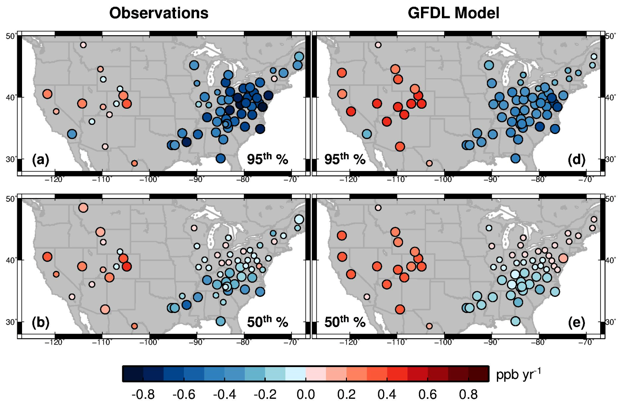 Surface-level ozone, also known as smog, has increased over the past quarter century at western US rural sites during springtime, partly due to rising Asian pollution, whereas smog has decreased in the eastern US but can spike due to heat waves, according to a new study from Princeton University and the National Oceanic and Atmospheric Administration's Geophysical Fluid Dynamics Laboratory (GFDL). Shown are the 1988-2014trends in springtime ozone levels on days that were very smoggy (top panel) and of average smogginess (bottom panel), from observations (left) and from a model built by the Geophysical Fluid Dynamics Laboratory (right). Larger circles indicate sites where there is greater certainty about the ozone trend. On very smoggy days (top panel), ozone levels have declined in the east, as indicated by the blue circles. Ozone levels have increased in the west, as indicated by the red circles, despite a 50 percent reduction in the emission of smog-forming pollutants. Credit: Meiyun Lin