Entwined lives
"Entwined," Tim Laman's image of a determined young male orangutan shimmying up the thick root of a tree in Indonesian Borneo, beat almost 50,000 entries from 95 countries to win the grand prize at the Natural History Museum of London's 2016 Wildlife Photographer of the Year competition. The annual contest calls on photographers worldwide to put nature in the frame.
Laman, an American photographer, spent three days climbing up and down a tree by rope, positioning GoPros to catch his winning shot of the endangered animal climbing 100 feet (30 meters) to grab a crop of figs in Gunung Palung National Park. Laman knew the orangutan would return to forage after spotting him at the site earlier.
Wild orangutans face a crisis of habitat loss due to agriculture and logging. 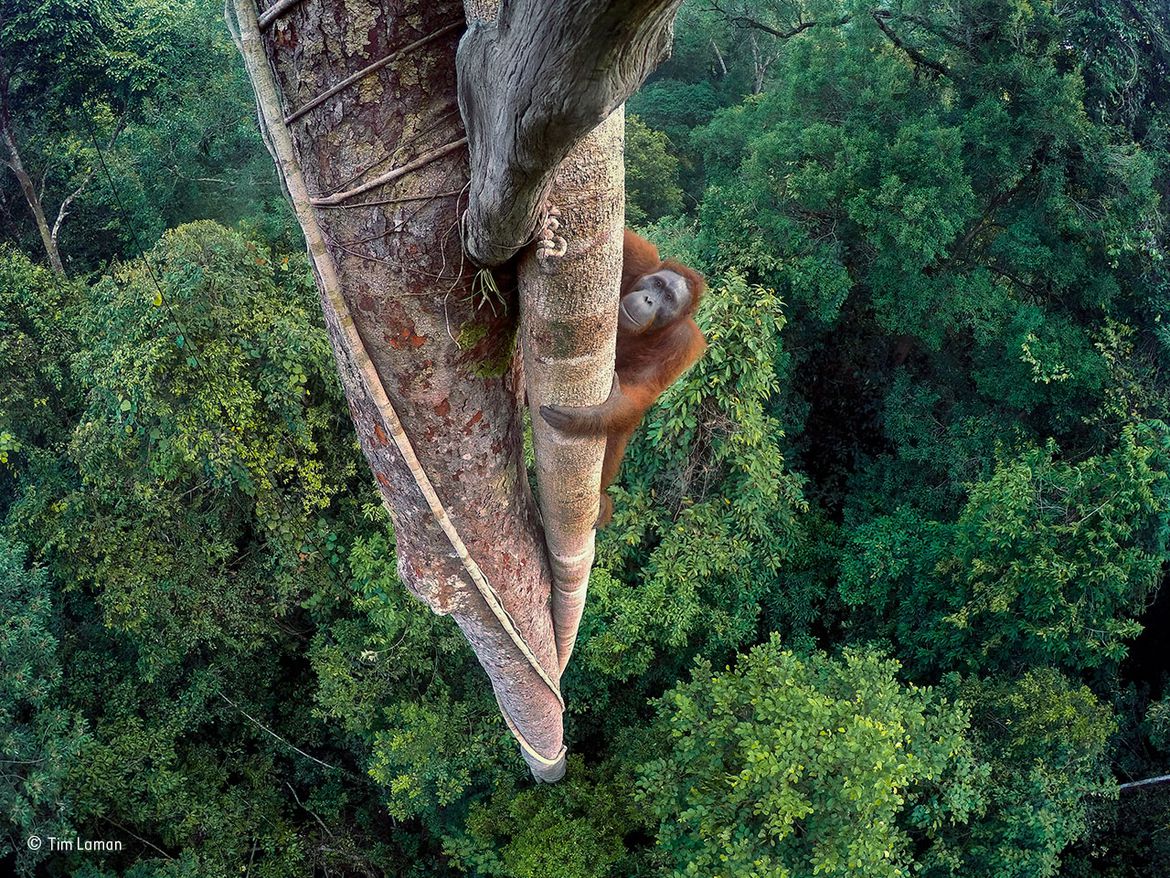 
The moon and the crow
Gideon Knight, 16, won the Young Wildlife Photographer of the Year title for this magical image of a crow in a tree. The twigs of the sycamore silhouetted against the night sky in a London park "made it feel almost supernatural, like something out of a fairy tale," Knight said of the sight.
An exhibit of the winning photos opens at the Natural History Museum in London Friday before touring across the UK and internationally. 
Star player
Curious young California sea lions swam over to get a better look at diver
Luis Javier Sandoval, and he got a good look right back in this photo, which won in the "Impressions" category of the London Natural History Museum's Wildlife Photographer of the Year awards.
"I love the way sea lions interact with divers and how smart they are," says Sandoval, who's from Mexico and angled his camera up from the dawn light to shoot this picture at Esprritu Santo in the Gulf of California. 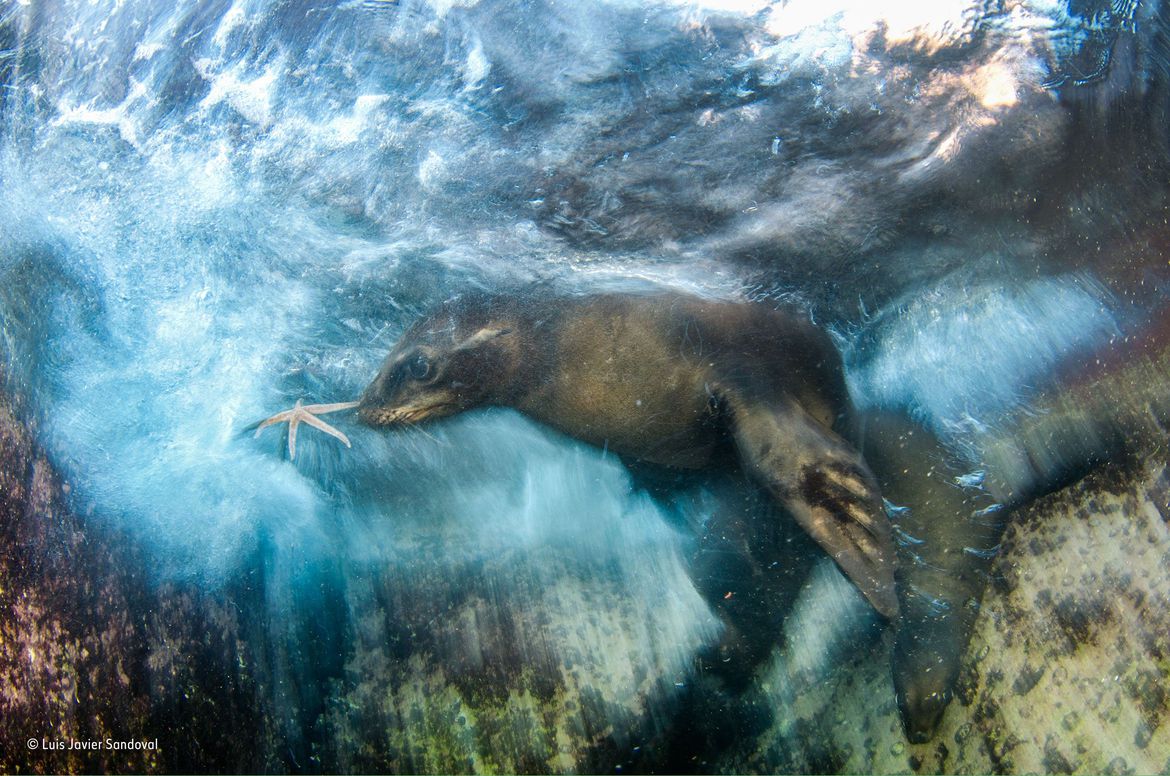 
Requiem for an owl
Walking in the forest near his home in southern Sweden, Mats Andersson often spotted
a pair of Eurasian pygmy owls. When he found one of them lying dead, he photographed the survivor.
"The owl's resting posture reflected my sadness for its lost companion," the photographer says. He preferred to shoot in black and white as it captured the melancholy of the moment better. 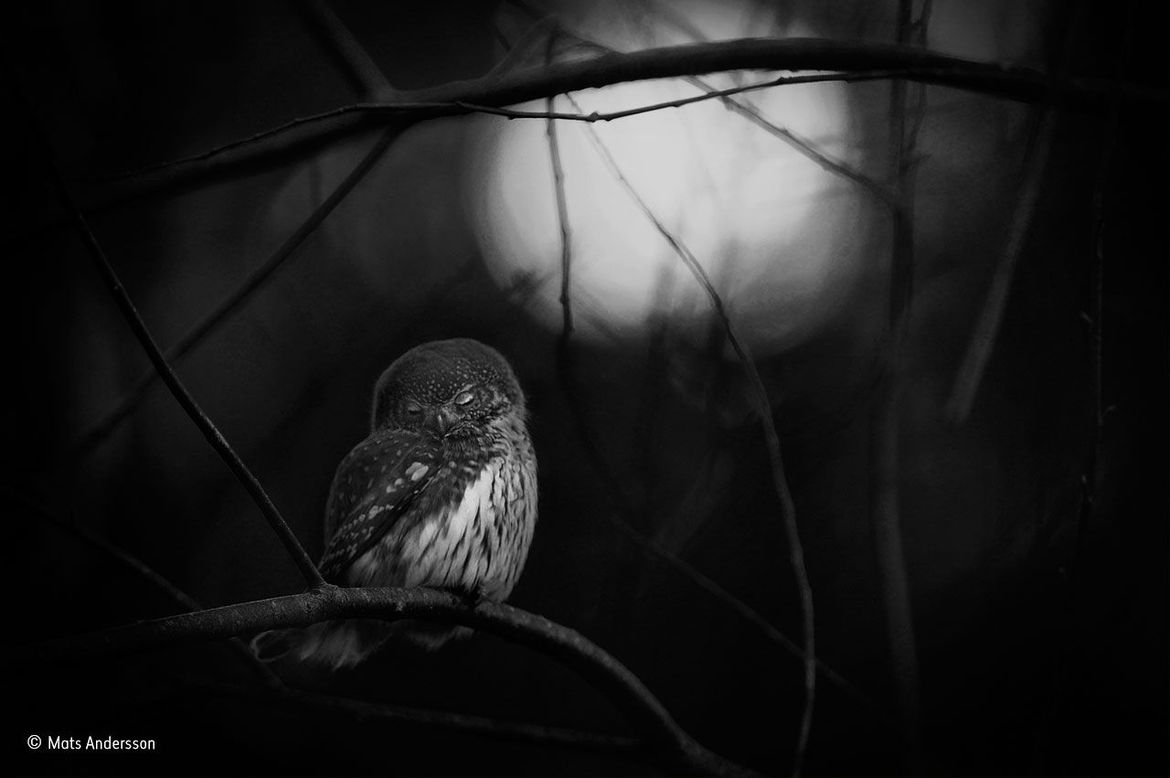 
The alley cay
It took Nayan Khanolkar four months to get the perfect shot of a leopard slipping through an alley
in a suburb of Mumbai, India, bordering Sanjay Gandhi National Park.
Nayan hopes those living in the new high-rise developments that now impinge on the park will learn from the Warli people who have long coexisted peacefully with the cats how to respect the original inhabitants of the land. 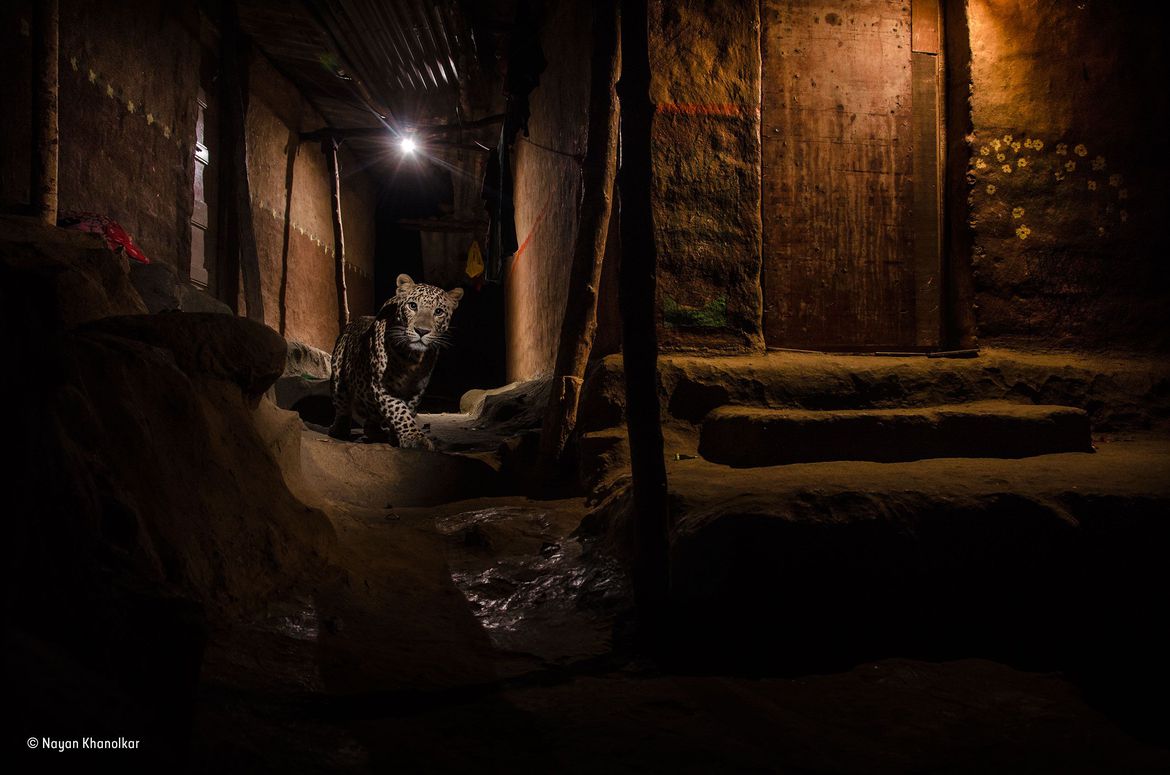 
The pangolin pit
Some 4,000 defrosting dead pangolins were illegally destined for China and Vietnam when Indonesian police and the World Conservation Society seized them from a shipping container.
"Wildlife crime is big business," says Paul Hilton, who snapped this winning shot. "It will stop only when the demand stops."
Pangolins - which are sold for traditional medicine or the exotic-meat trade -- have become the world's most trafficked animals. 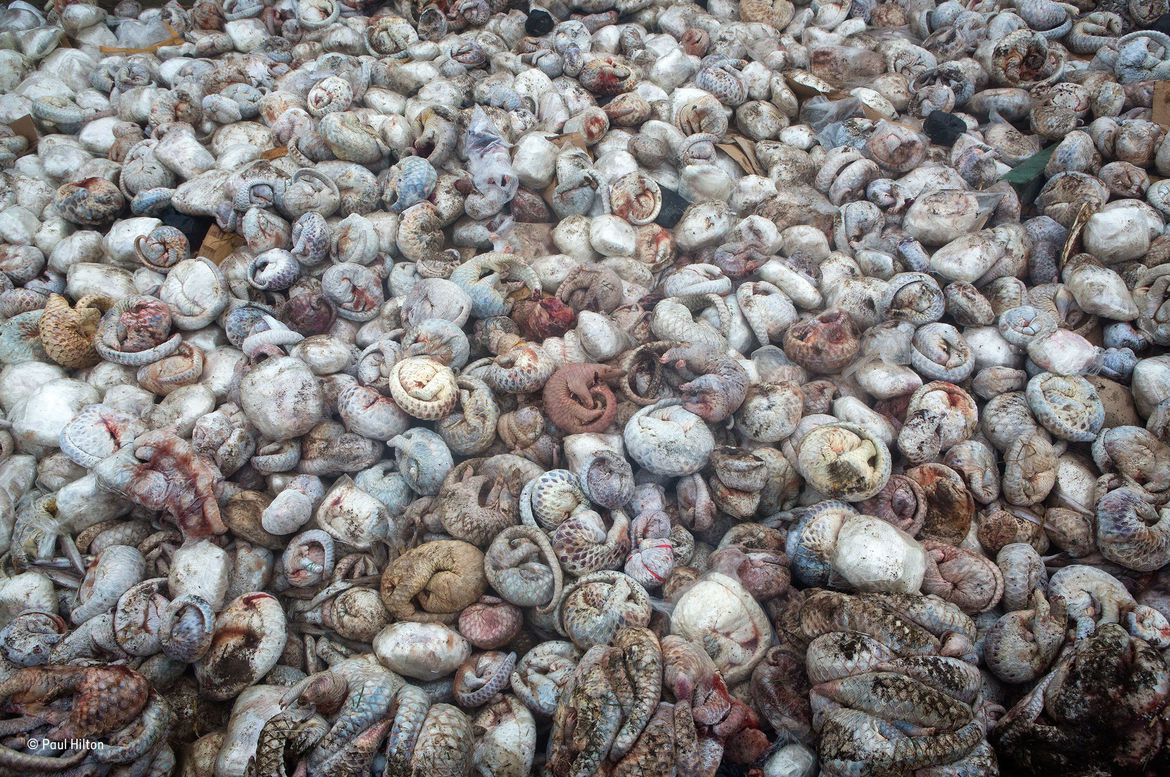 
Wind composition
Wind gusts around a hazel tree near Valter Binotto's home in northern Italy produced showers of pollen lit by the winter sun. Binotto's shot of male and female flowers on the same tree won in the
"Plants and Fungi" category. 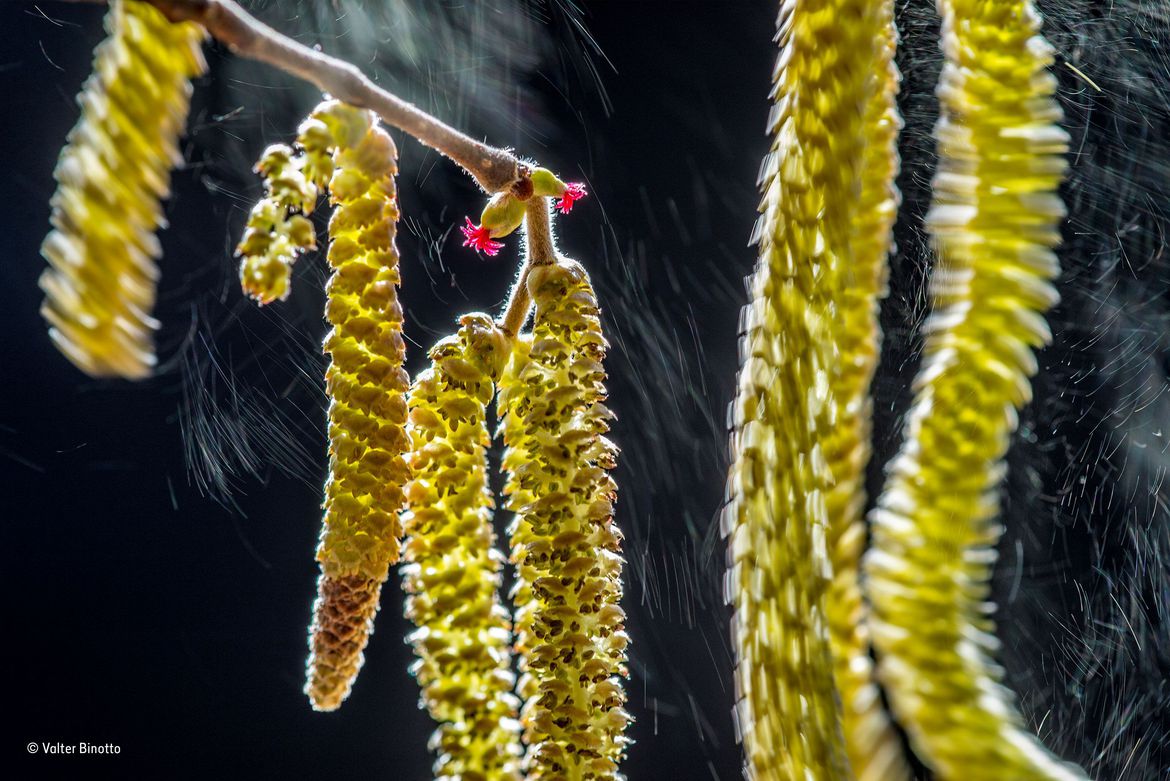 Snapper party
Tony Wu, winner in the "Underwater" category,
captured a dynamic arc of spawning fish around Palau in the western Pacific Ocean. It wasn't an easy scene to capture: Wu faced strong currents, low light and water clouded with sperm and eggs. 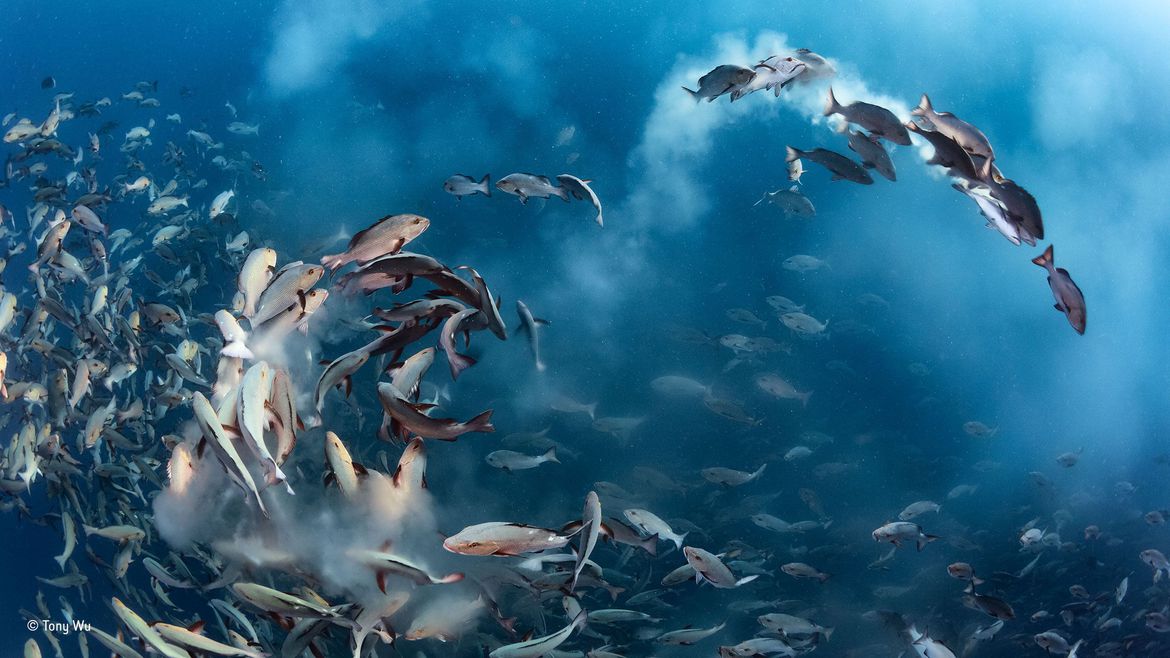 
The sand canvas
Rudi Sebastian of Germany heard about Brazil's Lencois Maranhenses National Park from a TV program, and realizing its photographic potential, planned a trip there almost two years in advance. He waited several days for the perfect light to capture images of rain collecting in crescent-shaped dunes up to 130 feet (4o meters) high.
Bacteria and algae tint the water green and blue, while streams carrying sediment from the distant rainforest provide brown and black accents. 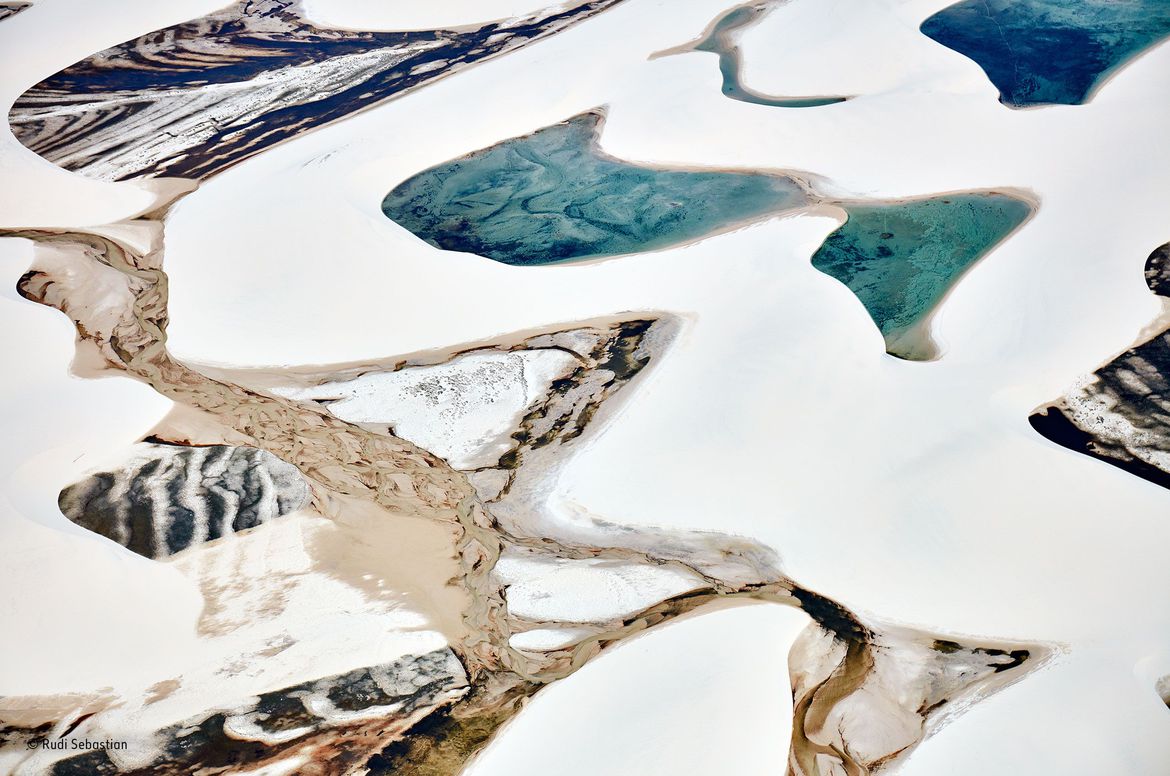 Eviction attempt
Ganesh H Shankar watched as Indian rose-ringed parakeets trying to kick a Bengal monitor lizard out of their roosting and nesting hole in a tree in India's Keoladeo National Park.
To do this, they bit the lizard's tail until it retreated into the hole. Then they would then harass it when it tried to come out to bask. Eventually the birds surrendered and left to search for a new abode. 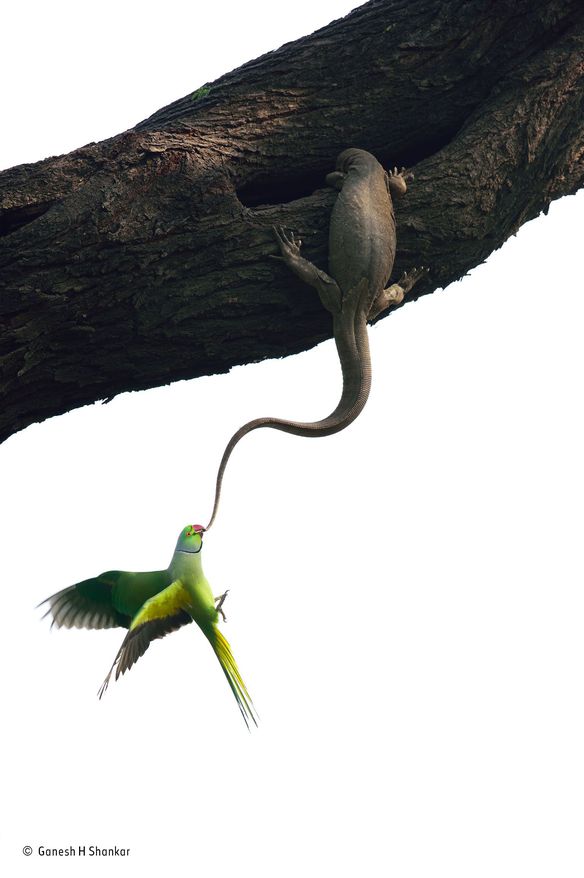