Plastic input into the oceans

Debris released by human activity on land can be washed by surface runoff or blown by wind into rivers and other watercourses and ultimately be transported into the ocean. Debris can also be directly dumped or discharged from boats or sewage plants into rivers (Rech et al., 2014). Plastic is very efficiently transported downstream due to its near-neutral buoyancy and may reach the ocean after only a few days (Kabat et al., 2012). Rivers transport plastic debris and, because the average journey is much shorter than the time needed for plastic to degrade, the majority ultimately reaches the ocean. Debris can also become stranded on riverbanks or entangled in vegetation; it may then be remobilized by wind or surface runoff to continue its journey downstream (Williams and Simmons, 1997). During high discharge events caused by heavy rainfall or humancontrolled water releases, plastic and other debris can be exported far offshore from the river mouth. Dispersal of debris is also more efficient along coasts that experience high wave energy and/or large tides or other dynamic current regimes (Galgani et al., 2000; Carson et al., 2013; Lechner et al., 2014; Rech et al., 2014). 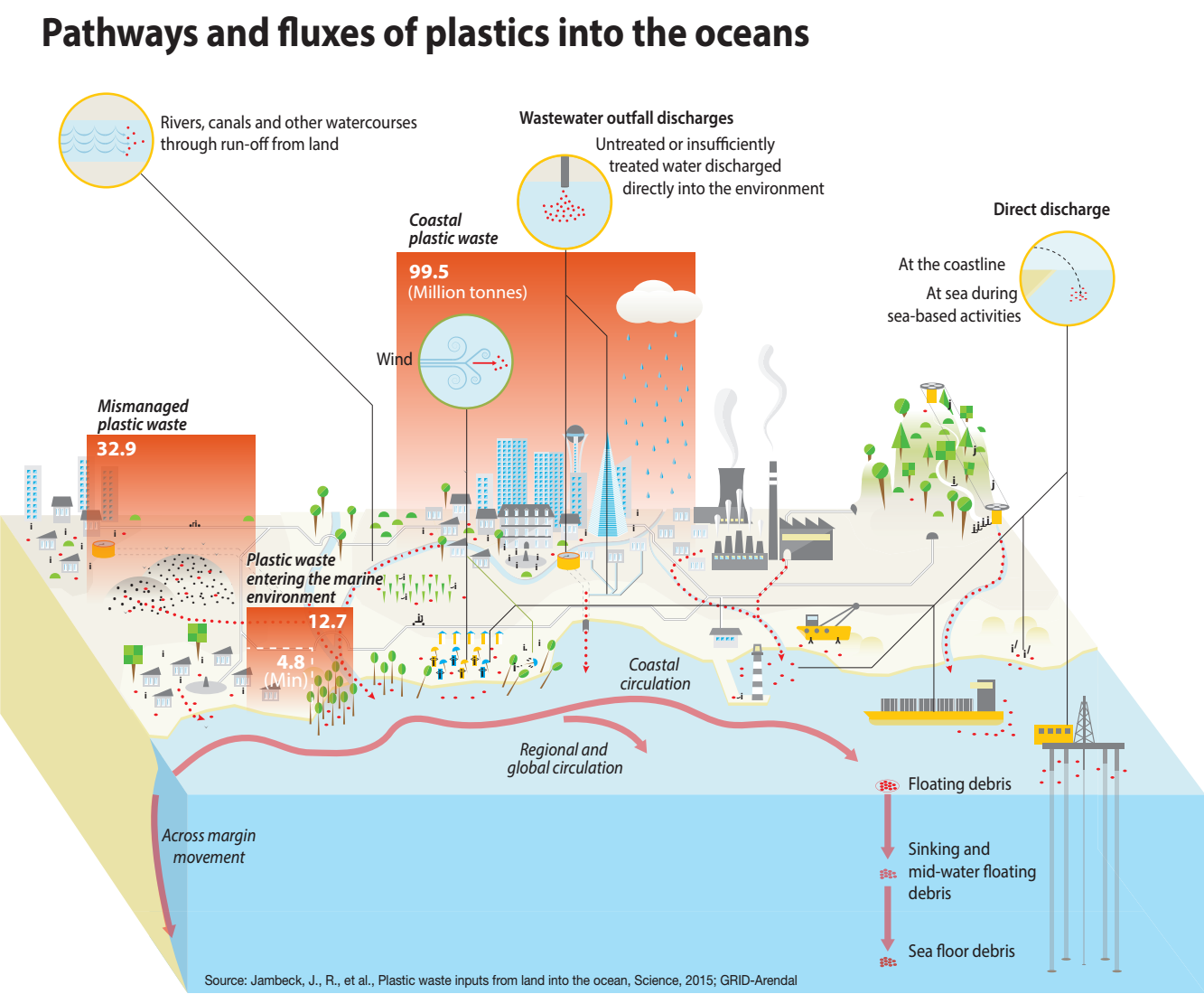 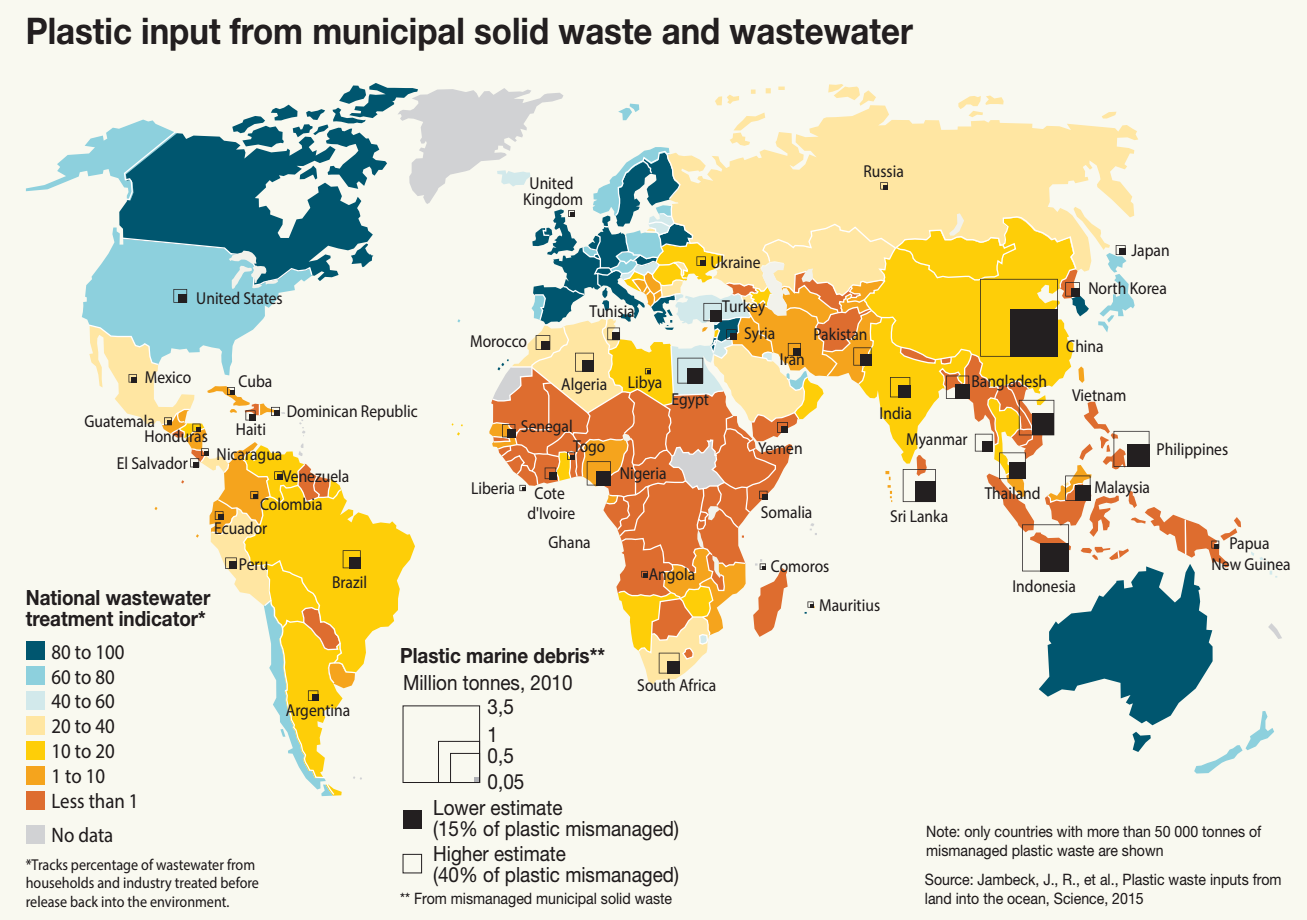 Despite knowledge of the role played by rivers, there are no global estimates of the amount of man-made debris reaching the ocean at river mouths. Therefore, of the estimated 4.8 to 12.7 million tonnes of litter which enter the marine environment in 2010 from land-based sources within a 50 km-wide coastal zone (Jambeck et al., 2015), the proportion delivered by rivers is unknown. Debris originating more than 50 km inland from the coast would also need to be added to the figures above. The quantity and composition of anthropogenic debris delivered by a particular river also depends on the intensity and character of the socio-economic activities and population density in the river basin. The implementation of environmental protection and waste treatment measures may help to reduce the leakage of debris. The distribution and extent of impervious surfaces (built-up areas) in watersheds has been used as a proxy for the input of plastic debris through watercourses, as it is directly related to both urbanization and runoff volume (Lebreton et al., 2012). 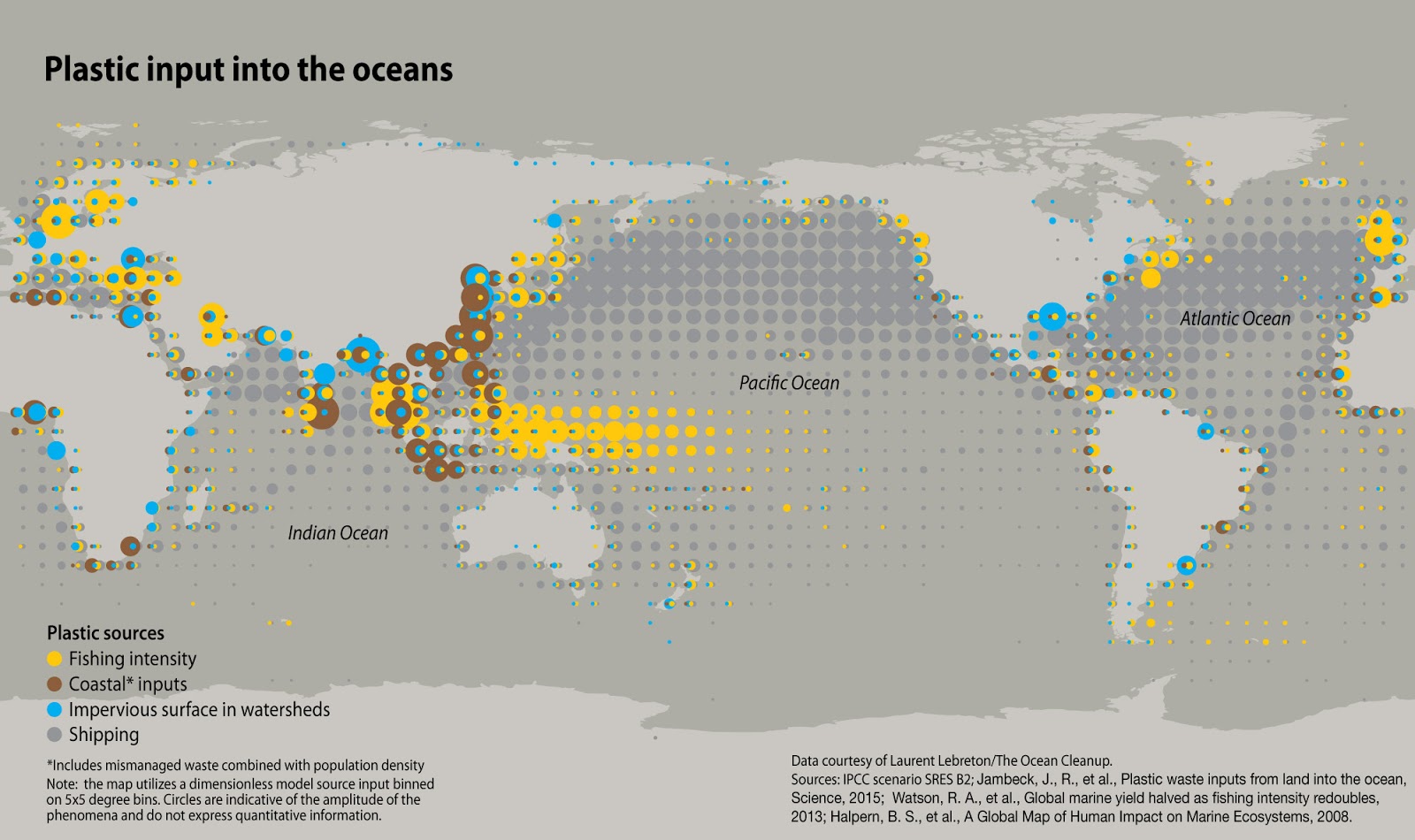 It is assumed that much less plastic debris is transported by wind than by rivers. There has therefore been much less investigation into input through this pathway. However, wind transport of plastic debris may be highly significant, particularly in arid and semi-arid areas with reduced surface runoff and dry and windy conditions. Wind may be an important localized pathway for lightweight debris, particularly from waste dumpsites located near or at the coast line, or beside watercourses. During intense storms such as hurricanes, wind can mobilize debris that would not normally be available for transport and carry it directly into rivers and the ocean (Lebreton et al., 2012). Wind can also provide an efficient pathway for the transportation of microfibres and small plastic particles, such as from tyre wear, across the land-ocean interface. 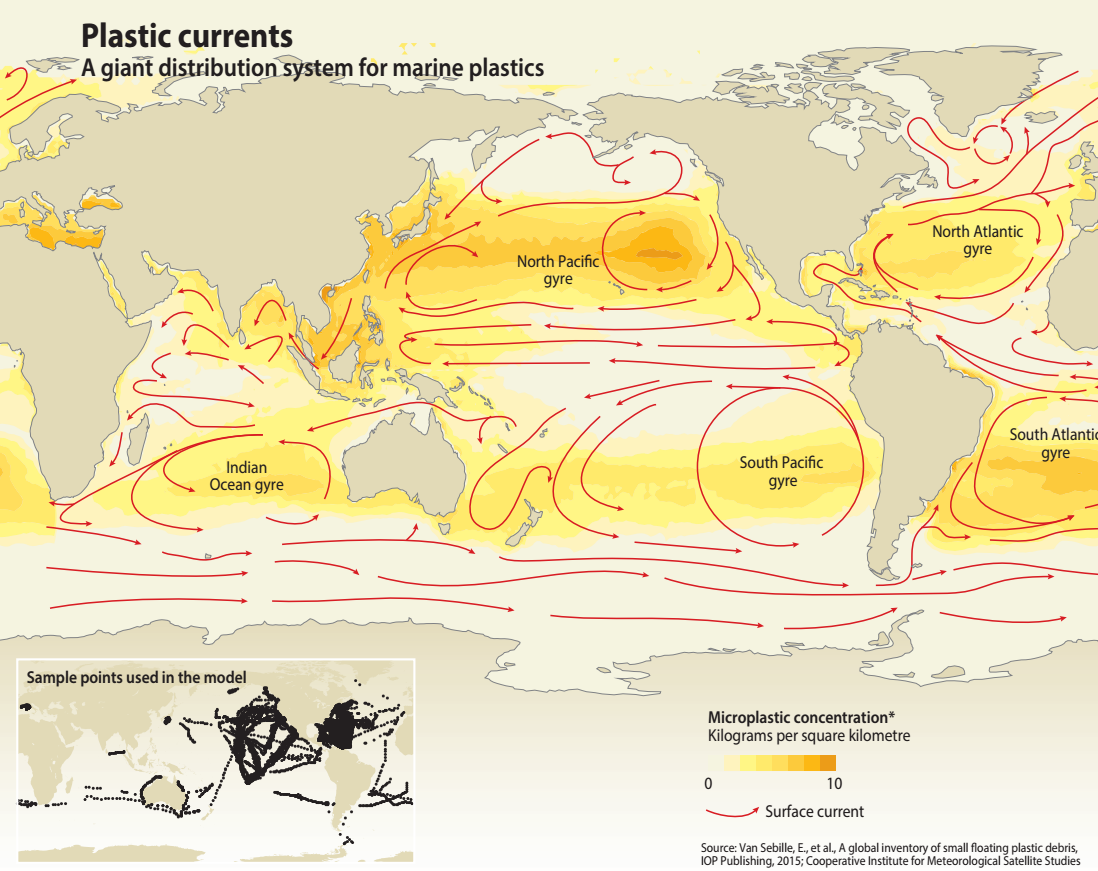 Wastewater effluent can be an important humanmediated pathway for plastic debris to reach riverine and marine environments. If the sewage collected is not treated thoroughly, or not treated at all, debris will be released into the environment. This means the smallest pieces of plastic can easily escape wastewater treatment plant filters. Entry from sewage discharge can peak during storm events when the capacity of the treatment facilities is surpassed and the wastewater is mixed with storm water and bypasses sewage treatment plants. The significance of sewage pathway contributions to river environments is illustrated by the higher abundance of plastic debris and sanitary products near the bottom in the vicinity of sewage treatment outfalls than elsewhere (Morritt et al., 2014). An environmental performance index, recording the percentage of wastewater treated and the proportion of the population connected to the sewage network, was recently calculated at country level (Malik et al., 2015). It showed the highest performance index for Europe and North America (ca. 65 and 50 respectively), intermediate for the Middle East, North Africa and East Asia and the Pacific (ca. 35 and 25), and low (< 10) for Latin America and the Caribbean, subSaharan Africa and South Asia. The average income of countries correlates with the performance indicator, as high income countries have on average a high performance indicator of ca. 65, whereas lower income countries have performance indicators below 15.

The direct discharge of debris from sea-based activities into the marine environment is a significant pathway for both the coastal region and the open ocean. Maritime transport, recreational navigation, fishing and aquaculture are the main human activities at sea which may lead to the release of marine debris. The geographical distribution and intensity of these activities (e.g. along main shipping routes) provide good proxies to assess input from seabased activities.