Europe has a long history of destructive earthquakes, and seismic risk can severely affect our modem society, as recently shown by the 1999 Izmit (Turkey) and the 2009 L'Aquila (Italy) events. Seismic hazard defines the likelihood of ground shaking associated with the occurrence of earthquakes. Assessing seismic hazard is the first step to evaluate seismic risk, the likelihood of damage and loss for the area of interest depending on vulnerability factors (e.g„ the type, age and value of buildings and infrastructures. population density, and land use). High hazard does not necessarily imply high risk: frequent large earthquakes result in high hazard but pose limited risk if they shake remote areas, while moderate earthquakes in densely populated areas may entail high risk.

The collaborative project ‘Seismic Hazard Harmonization in Europe (SHARE)" was supported by the EU-FP7 to deliver the first-ever complete, state-of-the-art hazard model, replacing older maps (ESC-SESAME. 2003). SHARE contributes its results as a regional program to the Global Earthquake Model (GEM) program initiated by the Organization for Economic Cooperation and Development.

The SHARE hazard results describe potential shaking associated with future earthquakes in Europe and serve as input for mitigation policies such as seismic risk assessment and earthquake-resistant design, covering single- and multi-storey buildings and critical infrastructures such as bridges or dams. Through coordination at the European Union level, these hazard results will help harmonize the next generation of national seismic hazard assessments and serve as a benchmark for the revision of the European seismic building code (EuroCode8). The data assembled by SHARE on earthquakes and faults will accelerate the generation of new scientific and technical knowledge to improve seismic hazard assessment in Europe. 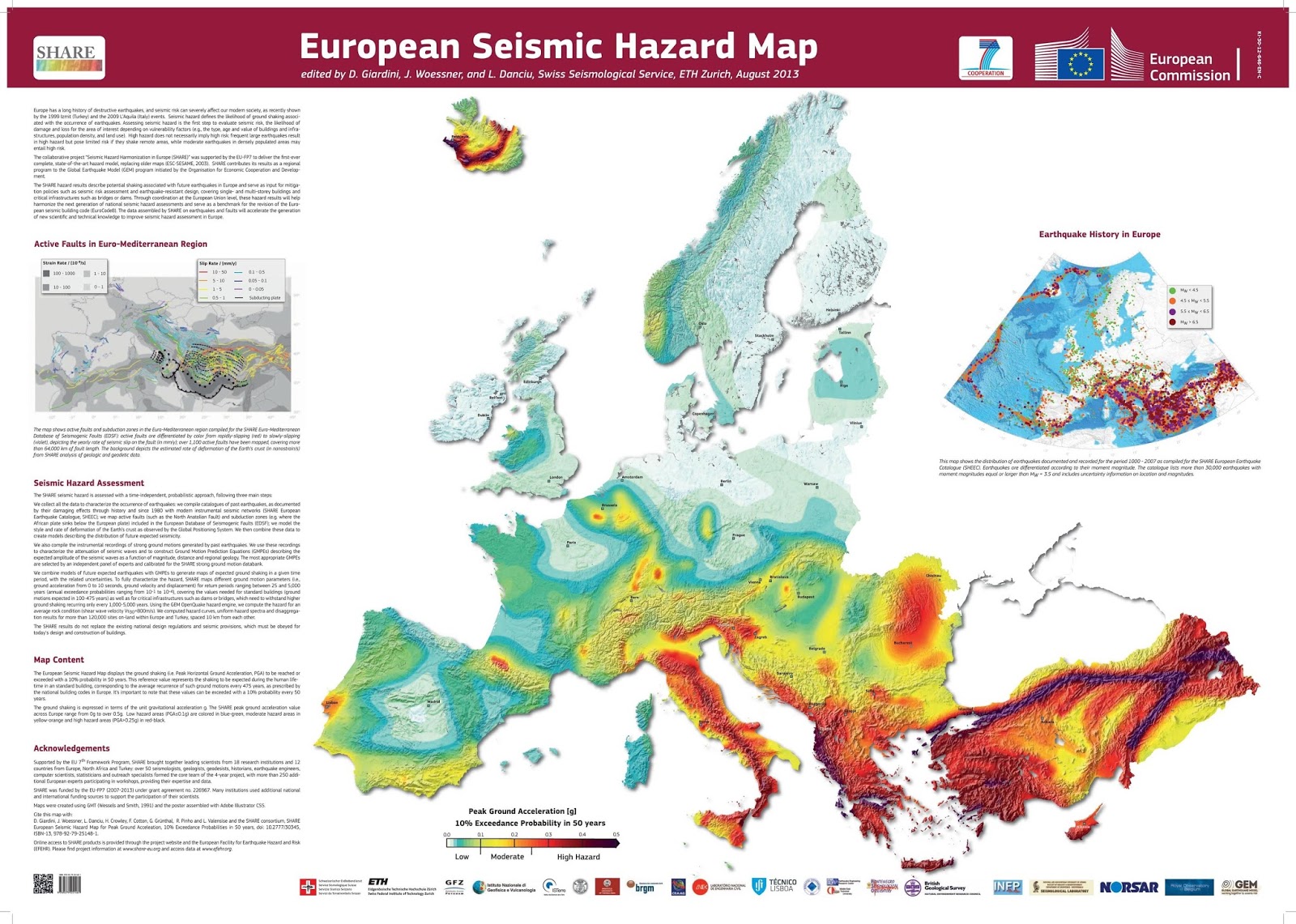 The European Seismic Hazard Map displays the ground shaking (i.e. Peak Horizontal Ground Acceleration, PGA) to be reached or exceeded with a 10% probability in 50 years. This reference value represents the shaking to be expected during the human lifetime in an standard building, corresponding to the average recurrence of such ground motions every 475 years, as prescribed by the national building codes in Europe. It’s important to note that these values can be exceeded with a 10% probability every 50 years.