Using NASA airborne radar, scientists have shown the degree to which New Orleans and its surrounding areas are sinking each year. Mostly caused by groundwater extraction. 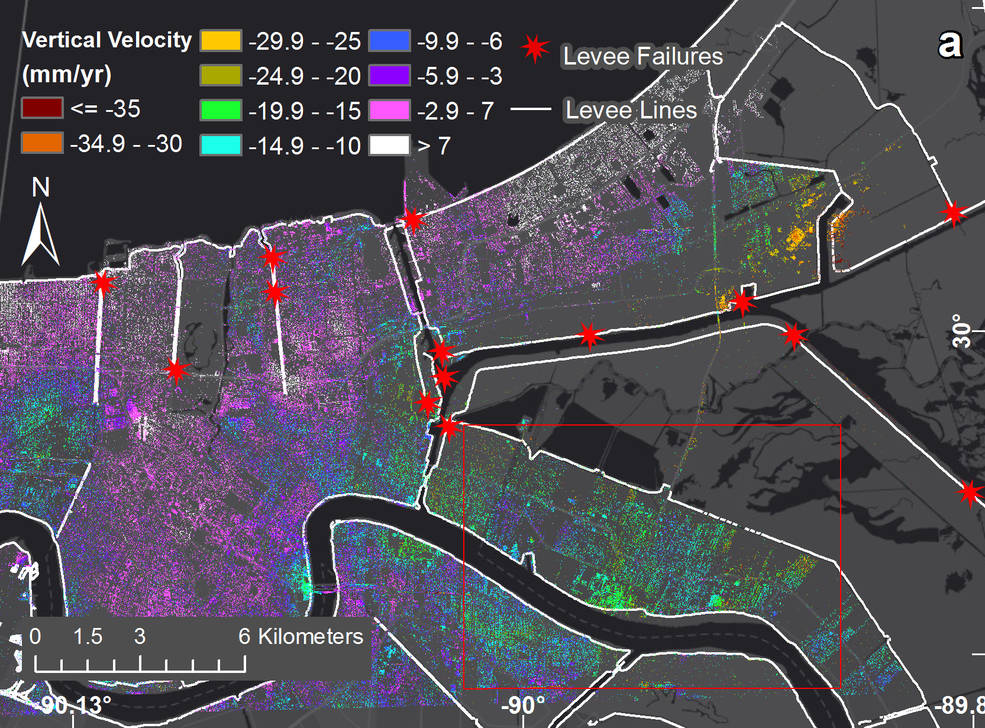 this elevation-dropping process (subsidence) driven by a combination of both natural and human-caused factors. In New Orleans, it’s caused by groundwater pumping and dewatering (i.e. pumping away surface water to prevent standing water and soggy ground).

The most severe sinking was observed upriver along the Mississippi River around major industrial areas, and in Michoud. Both of these areas experience drops of about two inches each year. Other notable drops in elevation were measured in the city’s Upper and Lower 9th Ward, and in Metairie, where the measured ground movements were linked to water levels in the Mississippi River. At Bonnet Carré Spillway east of Norco (the area’s last line of protection against springtime river floods breaching the levees), the scientists detected upwards of 1.6 inches of annual subsidence. 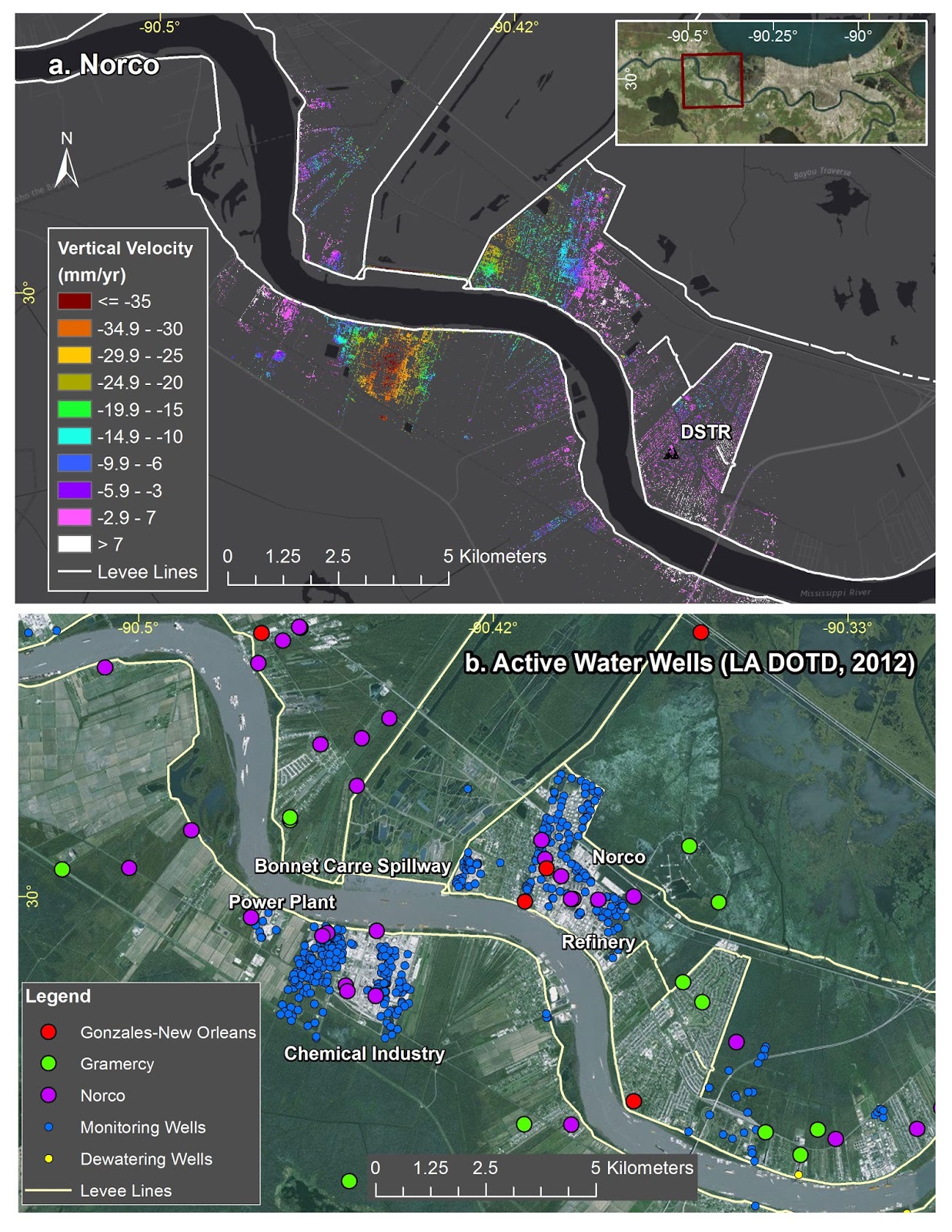 Subsidence rates around Norco, Louisiana, and the location of flood protection levees (white). Bottom: Location of water wells active in 2012, local industry and the Bonnet Carre Spillway. According to NASA, “the highest subsidence forms a bowl within the refinery site to the south of the river.” (Via: NASA/JPL-Caltech, Esri)

That might not sound like much, but these slow and steady drops add up quickly over time. Assuming this rate of subsidence continues, it could translate to an eight-feet drop in the most severely affected regions. Not only would this make flooding worse, but it would also expand the geographic reach of encroaching inland waters.

Back in 2005, around 80 percent of New Orleans and large tracts of neighboring parishes became flooded, and the waters lingered for weeks. 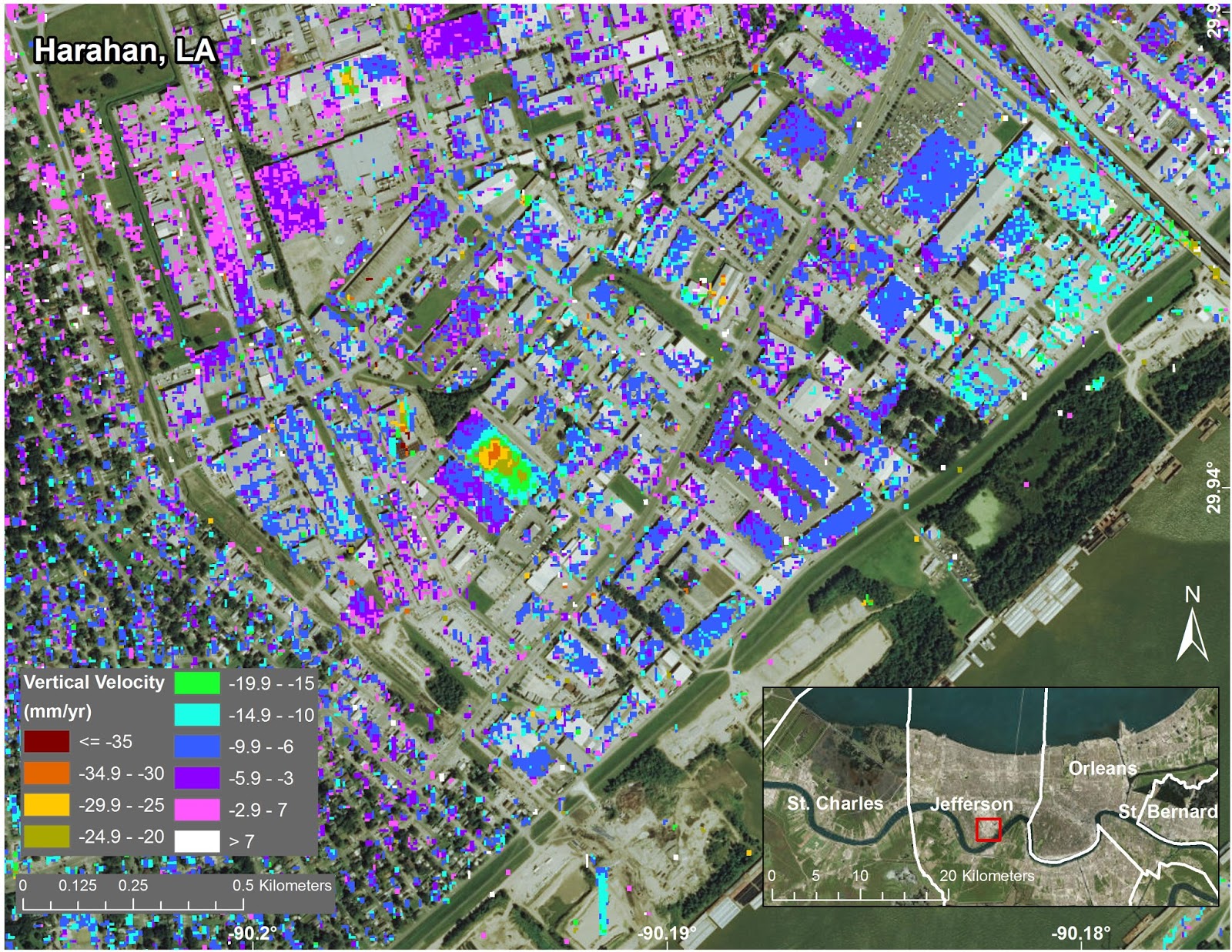 New Orleans is not the only part of the world experiencing this problem. Sections of China’s Yellow River are dropping at a rate of three feet every four years. Bangkok also has this problem. The only known method to prevent this condition is by pumping less groundwater, which is quite difficult to enforce when many people own their own water wells.