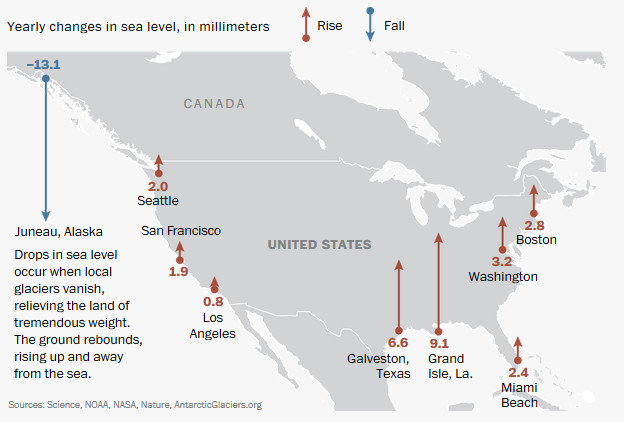 Sea levels creep higher and higher
Here’s where the water meets the road: Melting ice raises sea levels, and so does heat, because warmer water naturally expands. Scientists say that the last time the carbon dioxide in the atmosphere was this high, seas were significantly higher than they are now — estimates range from less than 10 feet to more than 100.

What does this gauge show?
Worldwide, sea level is more than three inches (83 millimeters) higher than it was in 1993, according to NASA’s Goddard Space Flight Center, which measures sea level using lasers. Many scientists predict that levels will rise an additional two to four feet by the end of this century.

What’s the problem?
Clearly, higher water means the potential for massive flooding, not just for coastlines but for people who live on low-lying land — which means about a third of the U.S. population. Higher sea level also means storm surges can roll farther inland, a growing danger when hurricanes are predicted to become more violent. And saltwater intrusion into fresh water can upset fragile ecosystems and economies that depend on them, such as shrimping and crabbing.

“There are so many things we’re locking into our system that are going to take thousands of years to play out,” said Bernadette Woods Placky, chief meteorologist for Climate Central, “and they just get more dramatic as they go along.”