Indonesia’s logging and plantation rights, fire hotspots and deforestation alerts will be mapped as a result of an ongoing Greenpeace Indonesia investigation into one of the world’s most fragile ecosystems.

The new interactive map comes shortly after the Indonesian province of Riau was forced to declare a state of emergency as fires returned to the region in 2016.

Forest fires in Indonesia – often linked to deforestation – have been branded the worst environmental disaster of 2015, with widespread impacts on air pollution and climate change.

The interactive map of company concession information in Indonesian forests – and how it relates to peatlands, fire hotspots and deforestation alerts – has just been published online.

The map brings together data on concessions held by logging, palm oil, pulp and mining companies.

As well as the concessions data, the map displays areas of primary and secondary forest, orangutan and tiger habitat, peatland and live fire and deforestation alerts. Indonesia’s swampy peatlands are an important carbon sink holding an estimated 60 gigatons of CO2 – equivalent to more than six years of global emissions from fossil fuels.

In an average year landscape fires cause an estimated 110,000 premature deaths across southeast Asia – and 2015’s fires were much worse than the years used to model those impacts.

The fires were partly fuelled by forest clearance and peatland drainage by palm oil and pulpwood companies.


Live data for for firefighting

Just last week a state of emergency was declared after further fires were detected in Riau province in eastern Sumatra. Riau has a lot of peat cover, pulpwood and palm oil plantations. 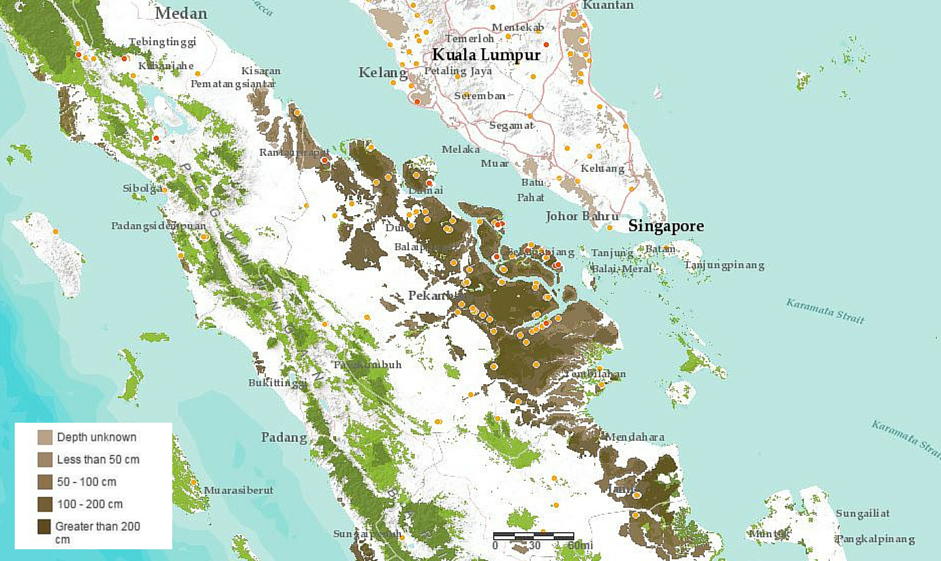 The government’s pledges to protect Indonesians against fire are dependent on the protection and restoration of peatlands by concession holders.

Companies wanting to convert forested peatland for palm oil plantations first cut canals to drain the peat before clearing the trees for planting – after which the dry peatland is much more likely to catch fire.

The Indonesian government has stated its commitment to preventing further fires like those of late 2015.

And the international community has also provided incentives for Indonesia to control deforestation: In 2010 Norway offered Indonesia $1 billion, a part of which was the One Map Initiative.

Despite this, and the establishment of a national peat restoration agency, progress has been slow – and only $60m has been handed over.

One of the problems is the lack of baseline data – the Indonesian government’s most recent published maps are from 2014. Without accurate data, attempts to protect the forests are likely to fail. Making data more accessible means buyers – such as firms which make consumer products – can check which concessions are thought to be held by which company.

The tool is still a work in progress and it is hoped that palm oil companies will come forward to provide more accurate details on their concession areas whilst the Indonesian government is under pressure to release all the data it holds in line with its commitments to the One Map initiative.