The Global Emotions 2016 report presents the results from Gallup’s latest measurements of people’s positive and negative daily experiences, based on nearly 147,000 interviews in 2015 with adults in 140 countries.

The Positive Experience Index score is the mean of all valid affirmative responses to these items multiplied by 100. County-level index scores range from zero to 100. Higher scores mean that positive emotions are more pervasive in a country. These scores strongly relate to people’s perceptions about their living standards, personal freedoms and the presence of social networks.

The Negative Experience Index score is the mean of all valid affirmative responses to these items multiplied by 100. Country-level index scores range from zero to 100. The higher the score, the more pervasive negative emotions are in a country. People’s experiences with health problems and their ability to afford food are predictive of higher negative scores. 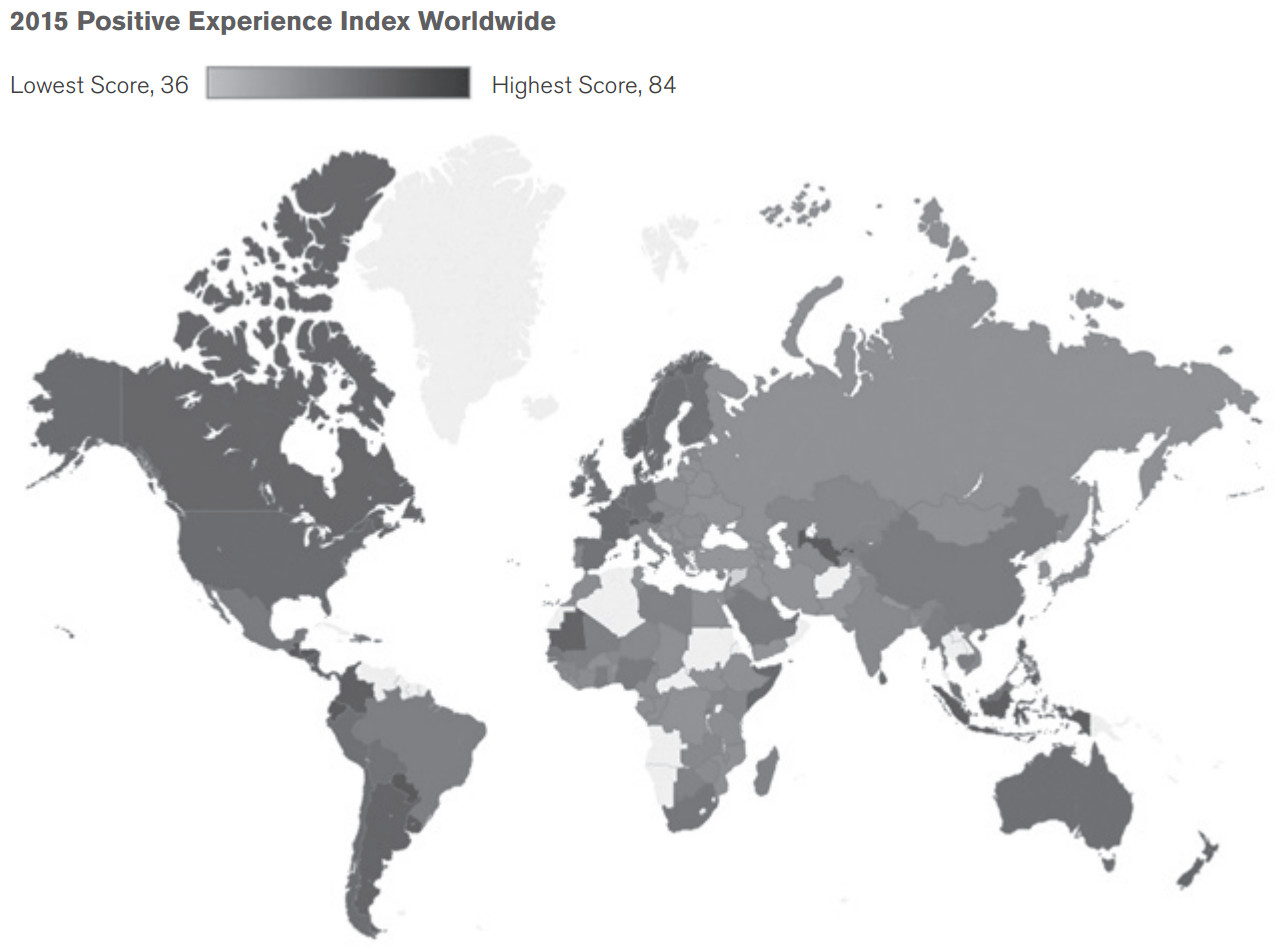 Gallup asked adults in 140 countries in 2015 if they had five positive experiences on the day before the survey. More than 70% of people worldwide said they experienced a lot of enjoyment, smiled or laughed a lot, felt well-rested and felt treated with respect. Additionally, 51% of people said they learned or did something interesting the previous day.

Latin American countries — and many of the same countries that topped the list in 2014 — dominate the list of countries in 2015 where adults are experiencing a lot of positive emotions each day. The only countries outside this region that top this list are Uzbekistan, Indonesia and Switzerland.

Personal freedom and the presence of social networks are also highly predictive of scores on the Positive Experience Index, the latter of which helps to explain why people from poor countries in Latin America still seem to live such positive lives.


Most of the World Still Laughing, Smiling a Lot

Majorities in nearly all countries worldwide say they smiled or laughed a lot during the day before the interview in 2015. On average, 72% of people worldwide reported doing this the previous day. In only seven countries — Ukraine, Iraq, Turkmenistan, Nepal, Serbia, Syria and Turkey — did these numbers fall to 50% or lower. 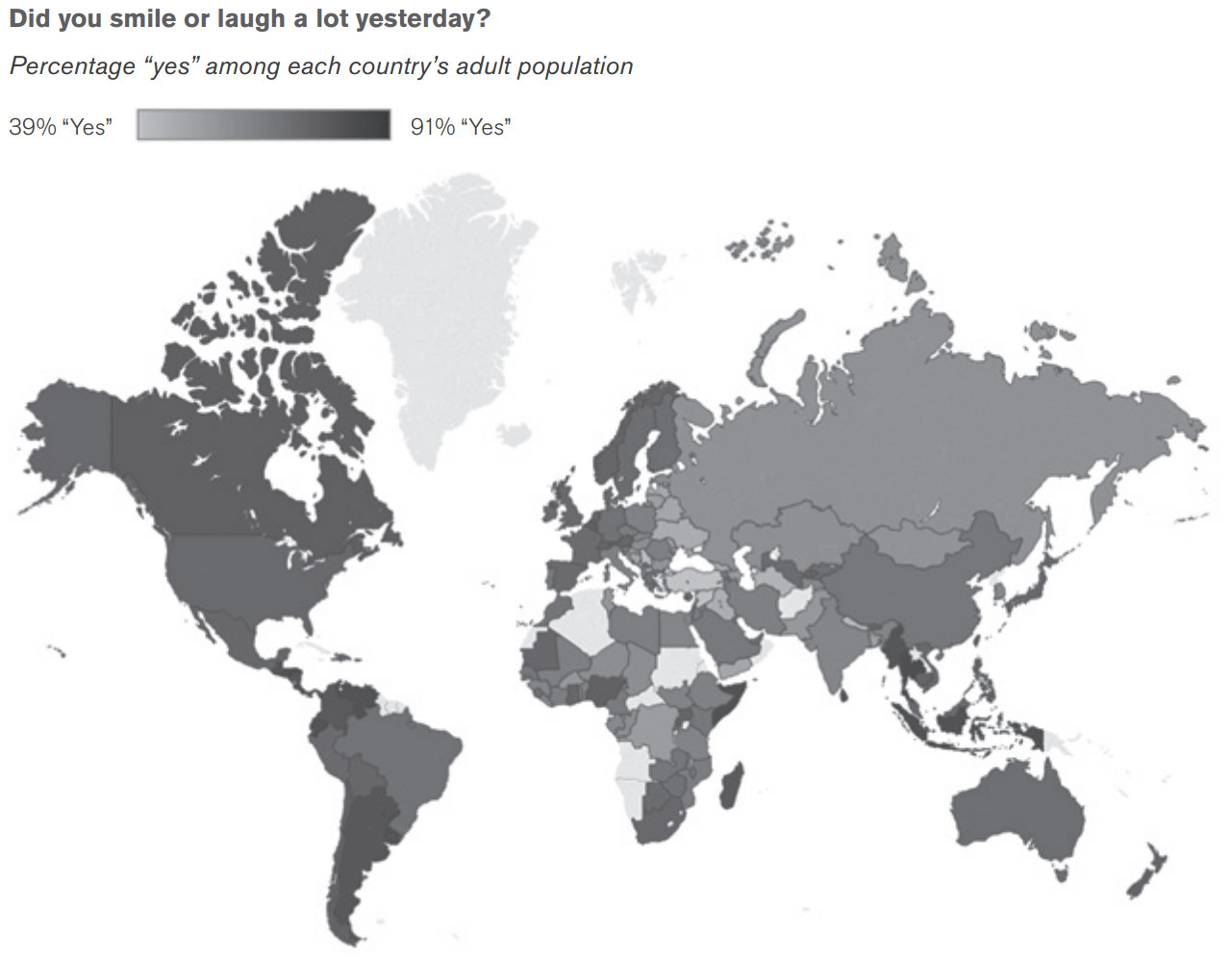 In 2015, Gallup asked adults in 140 countries if they had five different negative experiences on the day before the survey. More than one in three people said they experienced a lot of worry (36%) or stress (35%), and nearly three in 10 experienced a lot of physical pain (28%). At least one in five experienced sadness (21%) or anger (20%). All percentages increased between 2014 and 2015. 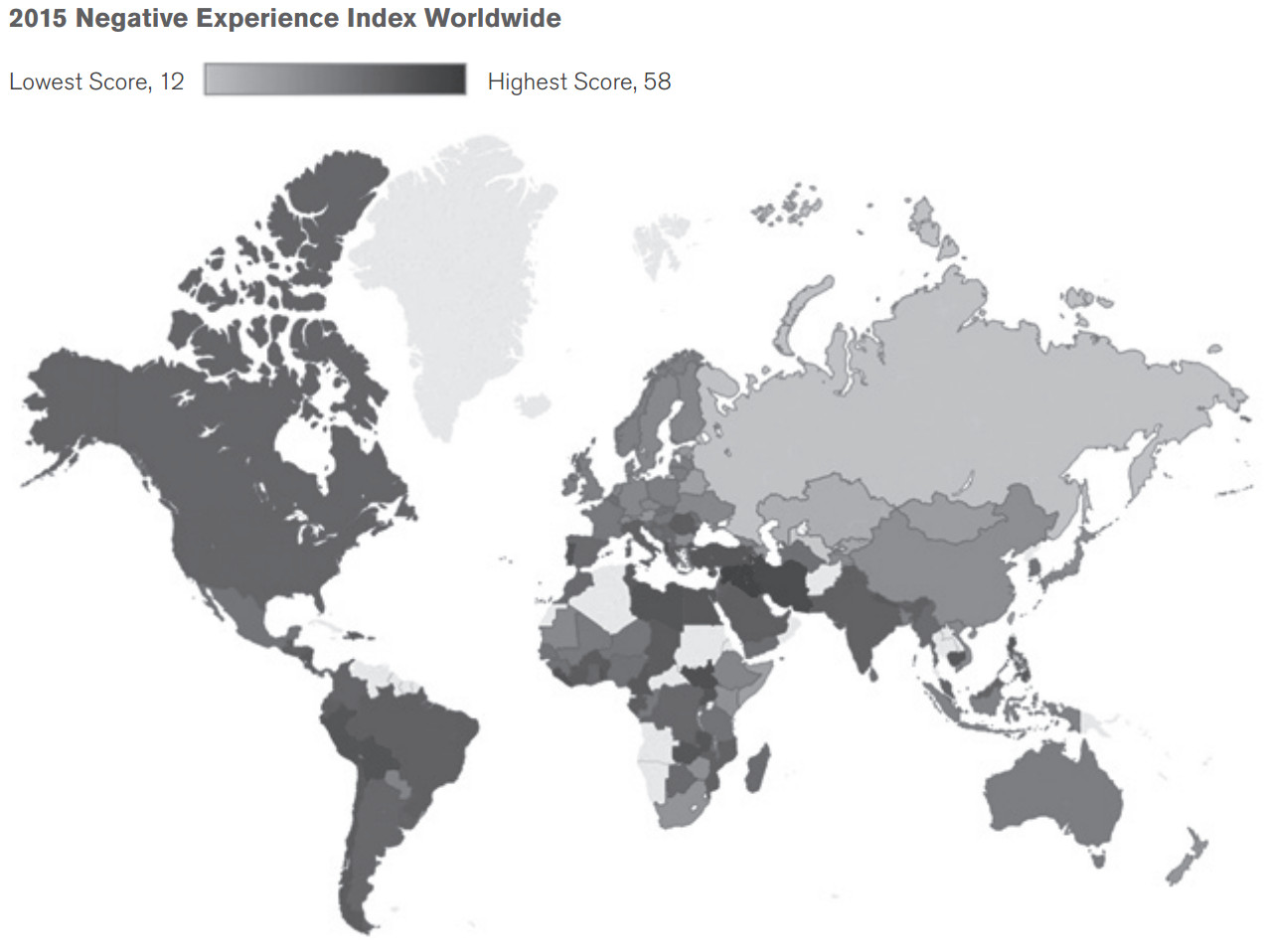 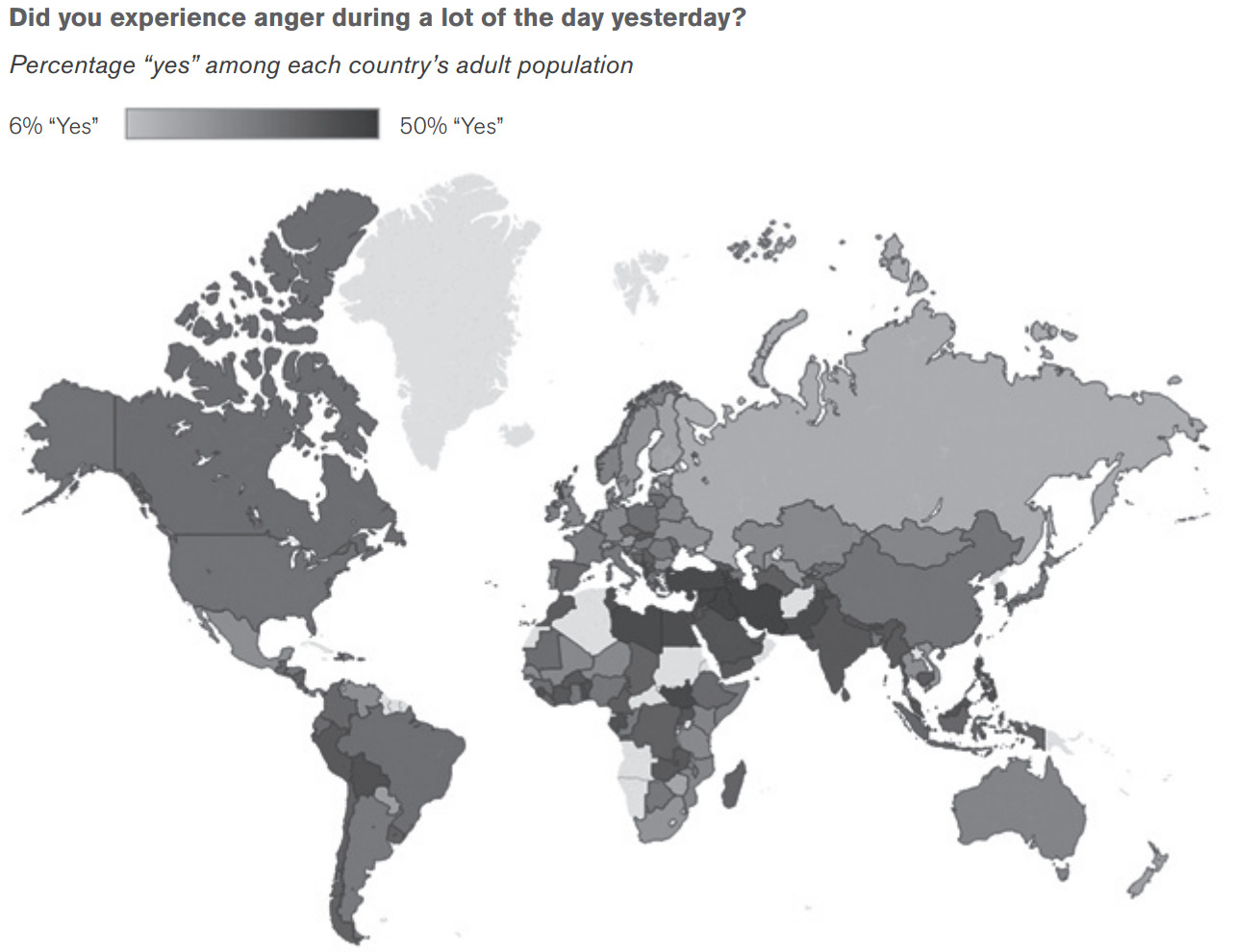 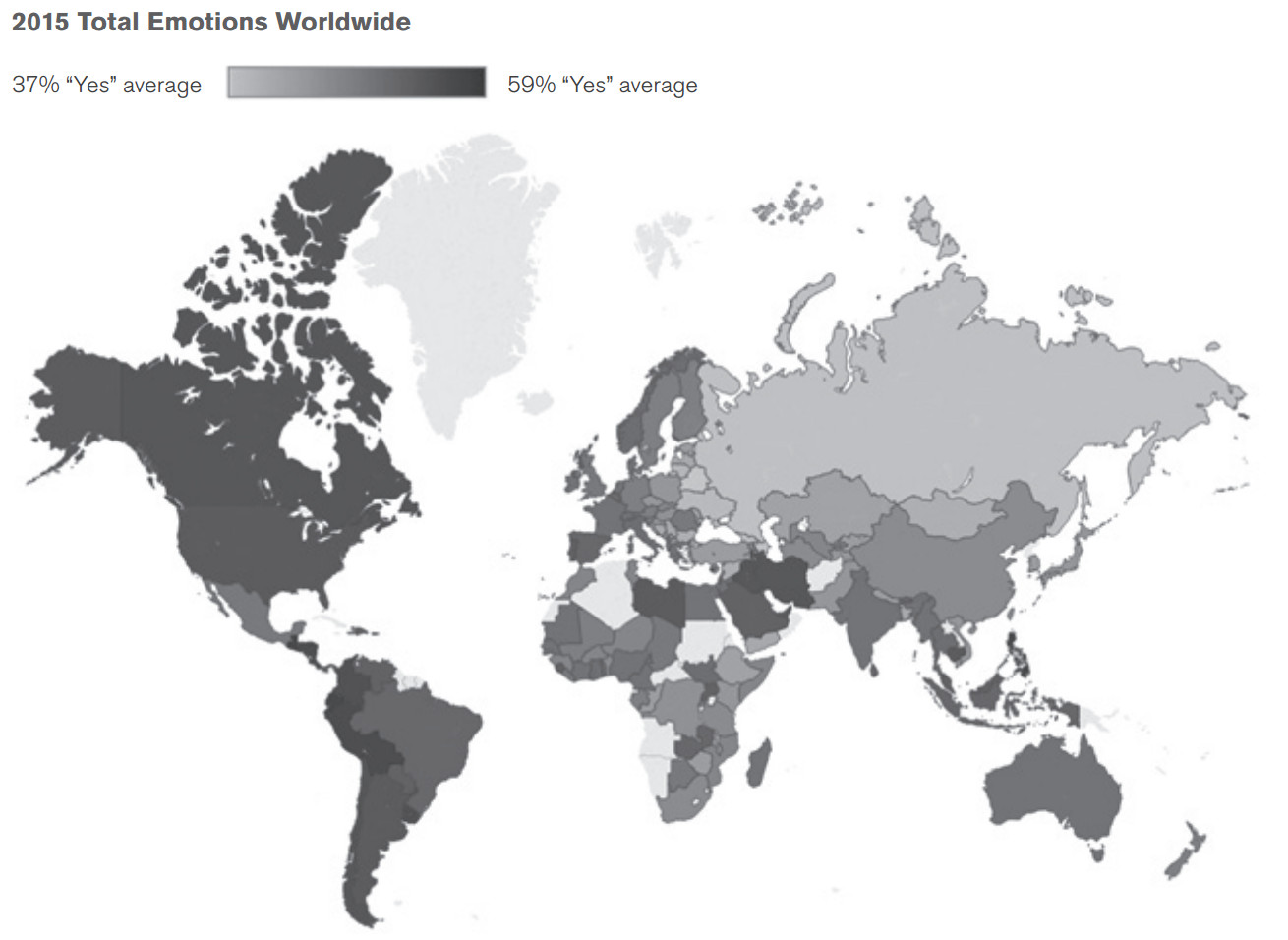 Ecuador, El Salvador, Guatemala and the Philippines top the list of the most emotional countries in the world in 2015. On average, nearly six in 10 residents in each of these countries reported experiencing positive or negative emotions the previous day.

Countries with ties to Russia and the former Soviet Union largely dominate the list of countries at the other end of the spectrum, where fewer than four in 10 residents reported experiencing any of these feelings.