Americans in danger from rising seas could triple

The number of Americans who could be displaced by rising seas will triple by the end of this century. That’s the stark new conclusion of scientists who studied the impact of climate change on coastal areas.

As many as 13.1 million people in the United States will be in the path of flooding by 2100, three times the current population that resides in low-lying coastal areas, according to the paper published online Monday in Nature Climate Change. The researchers took into account rapid population growth along the coasts in a way never done before.

"Populations are very dynamic by their very nature," says demographer and lead author Mathew Hauer of the University of Georgia. "You can end up with an obsolete assessment very quickly" in a study that doesn't fully capture the change already underway, he says.

Counties under threat
By 2100 U.S. coastal population are expected to face serious challenges due to projected 5.9-foot (1.8-meter) sea-level rise. 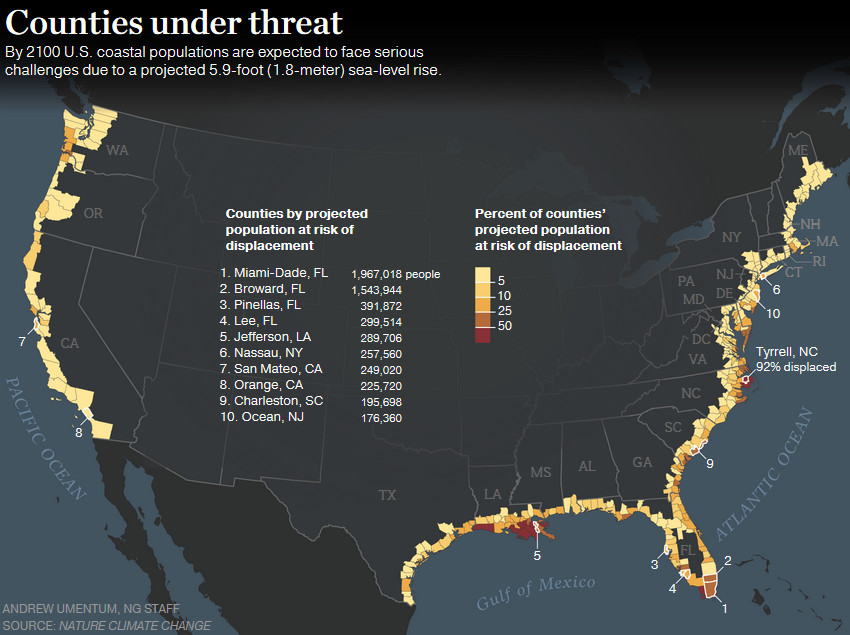 An estimated 4.9 million people could be forced from the coasts if seas rise 2.95 feet (0.9 meter) and coastal areas don't take protective measures such as dikes or man-made buffer islands, according to the study. The number displaced could balloon to 13.1 million if seas rise 5.9 feet (1.8 meters.)

The U.S. National Oceanic and Atmospheric Administration predicts sea levels will rise 8 inches (0.3 meter) to 6.6 feet (2 meters) by 2100, depending on the speed and extent of polar ice melt.

The new study underscores the challenge facing U.S. coastal cities as they grapple with global warming's impact on a landscape that happens to be the nation's most sought-after real estate.

The potential exodus from the coasts could be similar in size to the 20th century's Great Migration of 6 million African-Americans from the south, the authors wrote. The locus of the crisis would be similar: Nearly 70 percent of the people at risk will reside in the southeastern United States, with half of that concentrated in one state - Florida.

Miami-Dade County and neighboring Broward County, with potentially 3.5 million at risk under the high sea-level scenario, would account for more than a quarter of those displaced.

But the study, which took land elevation into account, also predicts "catastrophic impacts" for a handful of sparsely populated low-lying counties, such as Tyrell County, North Carolina. Tyrell, which bills itself as "nature's buffer zone" between the popular seashore resorts of the Outer Banks and the state's urban mainland, boasts the only mainland population of red wolves in the wild, as well as more than two dozen groups of endangered red cockaded woodpeckers. But 92 percent of its human population--about 6,000 people by 2100 - will live on land at risk of inundation in the high sea-level rise scenario.

Many areas of the West Coast and the northeastern United States will see little impact from sea level rise, the researchers say. Still, San Mateo County on San Francisco Bay would be one of the ten most populous areas affected, with 250,000 people in the path of flooding in case of high sea level rise, according to the study.

Hauer says his team included both the number and percentage of people at risk in the 319 coastal U.S. counties because both will be important. "We need to figure out where we're going to deploy critical infrastructure to protect coastal populations, and we hope this is a tool decision-makers can leverage," he says.
The authors project population change at an unusually detailed level by accounting for changes dating back to 1940 in U.S. Census block groups, the smallest geographical units containing rich demographic data.

Coastal engineer Robert Nicholls, professor at the University of Southampton in England, who was not involved in the study, says it was "very sensible" to take rising population trends into account. But Nicholls, who has served as a lead author for Intergovernmental Panel on Climate Change reports, notes the projections don't take into account human behavior.

"If nobody's protected, would people continue to move to the coast?" he says. "And will these people be left to adapt for themselves - which probably does mean some kind of retreat - or might they be protected?"

Moreover, flooding is only one of many possible fates for the coastline as sea level rises. Scientists led by the U.S. Geological Survey (USGS) published a separate analysis in the same issue of Nature Climate Change on Monday concluding that as much as 70 percent of the coastal landscape has some ability to adapt to sea level rise. The analysis includes the possibility - and uncertainty - of built structures to fend off flooding. But it also takes into account how the shoreline may change its shape through natural processes like erosion and deposition, rather than flooding, in response to sea level rise.

"Our analysis is adding the sand and the sponges," she says. "A barrier island might breach, it might over wash, inlets might be formed, sediment might move around, a marsh might migrate, a forest might transition to a marsh. Another way to put it is there are lots of places on the coast that want to change in response to sea level rise."

But Lentz says this is not reason for complacency. "What we're trying to provide policymakers with is a better picture of what areas might be used for mitigation, for buffering, and other trade-offs: what areas are likely to change, versus drown."