A Global View of Methane 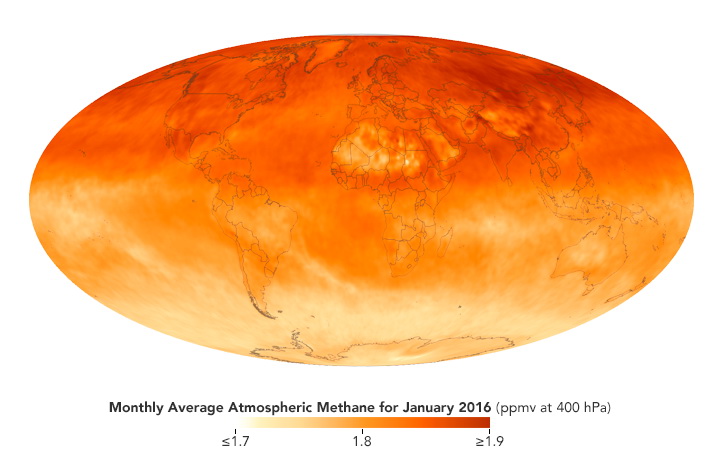 For a chemical compound that shows up nearly everywhere on the planet, methane still surprises us. It is one of the most potent greenhouse gases, and yet the reasons for why and where it shows up are often a mystery. What we know for sure is that a lot more methane (CH4) has made its way into the atmosphere since the beginning of the Industrial Revolution. Less understood is why the ebb and flow of this gas has changed in recent decades.

You can find the odorless, transparent gas miles below Earth’s surface and miles above it. Methane bubbles up from swamps and rivers, belches from volcanoes, rises from wildfires, and seeps from the guts of cows and termites (where is it made by microbes). Human settlements are awash with the gas. Methane leaks silently from natural gas and oil wells and pipelines, as well as coal mines. It stews in landfills, sewage treatment plants, and rice paddies.

The Atmospheric Infrared Sounder (AIRS) aboard NASA’s Aqua satellite offers one satellite-based perspective on the methane in Earth’s atmosphere. The map above shows global methane concentrations in January 2016 at a pressure of 400 hectopascals, or roughly 6 kilometers (4 miles) above the surface. Methane concentrations are higher in the northern hemisphere because both natural- and human-caused sources of methane are more abundant there. Since AIRS observed the methane fairly high in the atmosphere, winds may have transported plumes of gas considerable distances from their sources.