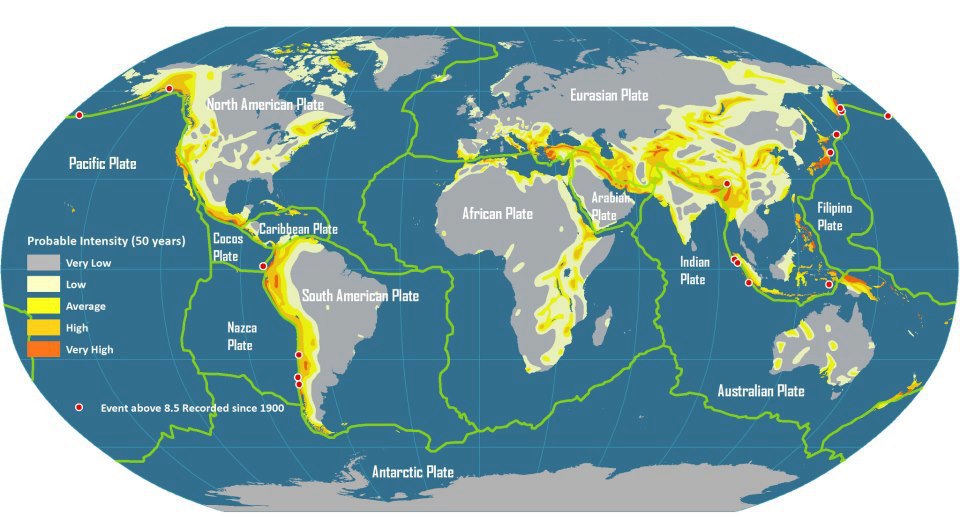 The study of plate tectonics offers an interesting view on our planet’s past, present, and future seismic activity. The larger and expanded map indicates the probable intensity of earthquakes that could happen in the next 50 years, starting from 2004. The green lines represent the earth’s plate boundaries and the shaded colors ranging from grey to orange represent the probable intensity of an earthquake in that specific region. Each red dot on the map represents a recorded seismic event since 1900 that had a Seismic Moment Magnitude above 8.5. Dr. Jean-Paul Rodrigue, the author of this map, explains that it is a matter of when, rather than if, that these endangered areas face some sort of seismic activity in the near future.

Although there are vulnerable areas in middle Asia, the Middle East, and Europe, with very distinguishable seismic activity, such as Italy for example, most areas that have had either previous or predicted earthquakes exist on the edges of the Pacific Ocean in a region called the Ring of Fire, depicted in the zoomed-in second map. This horseshoe shaped border of most of the Pacific Ocean stretches for 40,000 km (≈25,000 miles) and contains 75% of the earth’s active and dormant volcanoes. Notice that out of the documented 16 earthquakes that had magnitudes higher than 8.5, 12 occurred almost directly on the Pacific Ring of Fire. This is no coincidence. A collection of convergent, divergent, and transform boundaries create this highly active ring where powerful earthquakes shake the ground and active volcanoes reshape terrains.

Recently within the Ring of Fire, Asia has suffered from catastrophic earthquakes and tsunamis generated from deep-sea earthquakes. Mount Ruapehu in New Zealand has continued to be one of the most active volcanoes on earth with consistent annual eruptions, and Chile has had some of the most spontaneous seismic activity in the world. It is hard to not become a little daunted by the events that have occurred within the Ring of Fire, especially for those who reside directly on and near the plate boundaries. One cannot help but to question where the next site of devastation will occur. With that said; continued research and mapping of seismic activity will generate more data and scientific breakthroughs which in turn will increase the predictability of dangerous seismic activity.