According to scientific estimates, the Earth is about 4.5 billion years old. Most of the evidence for our ancient planet is included in the stones that compose the Earth's crust. The rock layers like book pages with the remains of the old plants and animals that evolved from organic structures that existed three billion years ago document the past.
Below is the incredible diagram of the spiral geological time scale published on the United States Geological Survey website. 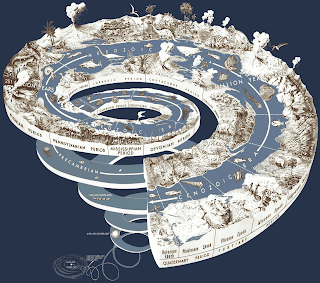 The geologic time scale is a system of chronological dating that classifies geological layers in time. The time scale was developed through the research of physical rock strata and the times when various living organisms appeared, evolved, and became extinct by studying fossilized remains and imprints.
Labels: Evolution Science