The spread of the olive tree in the Mediterranean Basin

The olive (Olea europaea) is a small evergreen tree native for the Mediterranean Basin.
The olive was originally planted seven thousand years ago in the eastern part of the Mediterranean region.
It is supposed to have first been planted in early times by autochthonous Middle Eastern people. Presumably indigenous to Syria, between 4000 and 1400 BCE, it expanded to Egypt, Crete, and Attica and then to the rest of the Mediterranean basin with the help of the Greeks, Phoenicians, and Carthaginians, where its cultivation was favoured by especially suitable climate and soils.
As a result, the olive tree has coexisted with people for nearly 5 000 years. 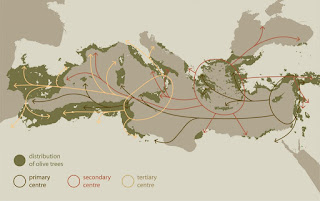 Spanish colonials carried the olive to the Nort and South America, where its horticulture prospered in now in Argentia, Chile, and Peru.
Later Spanish missionaries planted the tree in the 18th century in California.
As a native to the dry subtropical Mediterranean region, it adapts very well to severe environmental and agricultural conditions, often living for centuries.
Currently, in the Mediterranean basin, many olive trees have remained, whose age significantly surpasses one thousand years.
These oldest trees were over forest wildfires, natural disasters and the progress of human civilization. Most of them yet give olives. 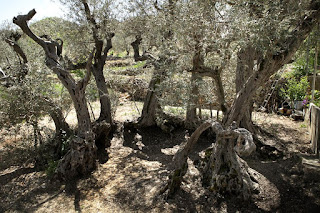 Noah’s sisters (Lebanon). The age of the tree is six thousand years

Today about 9.7 million hectares were covered with olive trees, which is more than twice the area of land devoted to apples, bananas, or mangoes. Just oil palms and coconut trees demand more space.

According to the FAO, an approximated 867 million olive trees are on the earth now, and the vast bulk of these are located in Mediterranean countries.

The ten largest olive producing Mediterranean countries get 95 per cent of the world’s olives.